A Navy Captain has been reportedly punished by the Chief of Naval Staff for allegedly exposing fraud. 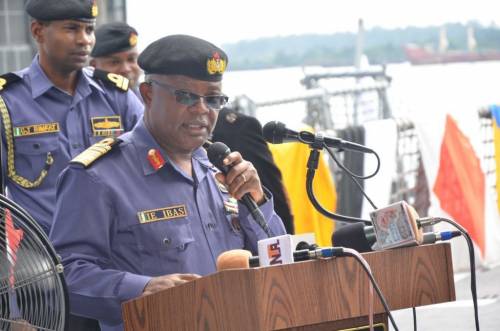 Nigeria's Chief Of Naval Staff, Ibok Ibas
Chief of Naval Staff, Vice Admiral Ibok Ekwe Ibas, has been accused of locking up Navy Captain Emmanuel Ekpe Owen (NN1538) in toilet for six days after exposing his financial impropriety.
This was revealed in a 10-page petition to military authorities dated December 12, 2019 and signed by the victim, who is seeking justice.
The petition partly reads, "I regret to humbly state the victimisation and injustice of my person vide a petition on the present Chief of the Naval Staff, Vice Admiral Ibot Ette Ibas, to the Commander-In-Chief of our great country Nigeria.
"The genesis of my problem with the present CNS could be traced to 1995 and 1996 when we were on national assignment in Liberia under the Economic Community of West African States Monitoring Group."
A source familiar with the matter told SaharaReporters that Owen was assigned to ECOMOG as Supply Officer in 1996.
The Nigerian Naval Ship AMBE was said to have been assigned to ECOMOG fleet under the command of Retd Captain Dada Labinjo (then commander), with present CNS (Ibas) then a Lieutenant Commander and second in command.
On one of NNS AMBE's trip to Nigeria in 1996 for Back Loading Military Ordinance, five officers and 33 ratings were dropped from the ship and assigned to various duties at Western Naval Command, Apapa, Lagos.
It was gathered that a total of 45 personnel were left onboard NNS AMBE, which eventually returned to Moronvia, Liberia, for continuation of ECOMOG duties.
The source said Captain Owen stumbled on the allowance file for the personnel onboard at the time and discovered that the present CNS had inflated the names of personnel to 85 instead of 45 with various rates attached to each recipient and already paid.
It was gathered that Owen summoned courage and confronted Ibas about the issue, insisting that the discrepancies in the ECOMOG allowance could put the ship in trouble and embarrass the Nigerian Navy.
Upon realising that Owen was in the know of his financial malfeasance with respect to the disbursement of allowances for 85 personnel instead of 45, Ibas ordered him locked inside a toilet for six days.
Ibas went further to accuse Owen of all sorts of offences including dereliction of duty.
At the moment, Ibas is said to be deliberately refusing to promote Owen but instead pencilled him down for early retirement next week.
Normally, Owen is expected to proceed on retirement in 2026.
The CNS is said to be responsible for the ordeal of Labinjo and his wife, who were detained for one year in an underground cell.
They have now been transferred to the Economic and Financial Crimes Commission for prosecution.
When SaharaReporters contacted spokesperson for the Navy, Suleiman Dahun, over the matter, he said he was not aware of the incident and declined further comments.
Source: Sahara Reporters
Top Stories