An Assistant Superintendent of Police has been killed while trying to arrest a murder suspect in Abuja. 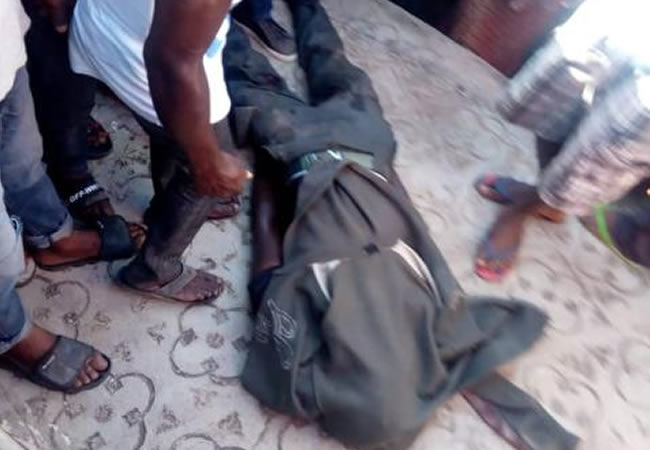 Body of the policeman who was killed during the robbery.

According to Punch Metro, Eric Isaiah, an Assistant Superintendent of Police, has been killed while attempting to arrest one Moses Peter, aka Dogo, wanted for culpable homicide.

The cop was reportedly killed by some persons at the Chief of Ushafa palace in the Bwari Area Council, Federal Capital Territory, Abuja, on Thursday, at about 9pm.

Narrating the circumstances surrounding the tragedy in a statement on Friday, the FCT police spokesman, DCP Anjuguri Manzah, said one Dominic Emmanuel had reported at Bwari Divisional headquarters that his brother, Moses Emmanuel, who was engaged to work as a mason by one Mrs Priscilla Patrick, was found unconscious after being attacked and severely injured.

Manzah said, “After he was rushed to Bwari General Hospital for medical attention, the Emmanuel was able to provide vital information about his assailants.

“Consequent upon this, Peter and one John were fingered as the perpetrators of the act.”

The police further said Emmanuel’s condition deteriorated and he later gave up the ghost at the hospital, where he was receiving treatment.

On the strength of this, the Divisional Police Officer, Bwari, sent one Insp. Okpanachi Audu and Sgt. John Mark to Ushafa village, where the deceased was attacked.

The detectives sighted and accosted Peter, who resisted arrest and thereafter, invited his friends from a nearby drinking joint, who insisted that the suspect must be taken to the Chief of Ushafa palace before the police could arrest him.

The statement added that the two police detectives obliged the crowd and went to the chief’s palace, where they met the secretary to the chief, one Danlami Busa, who assured them that the chief would soon attend to them.

“However, instead of addressing the issue, the chief’s secretary, at the instance of the chief, Alhaji Mohammed Baba, allegedly incited the crowd, who attacked the two detectives.

“As a result, a re-enforcement team led by late ASP Eric Isaiah, patrol and guard officer, Bwari Division, with three others were deployed and they arrived at the scene with a police Hilux vehicle which was used to rescue the two officers,” Manzah narrated.

He explained that the crowd brutally attacked and murdered Isaiah in cold blood after inflicting injuries on other members of the team, who narrowly escaped.

He disclosed that the chief of Ushafa and his secretary had been arrested and are providing the police with useful information regarding the murder of Emmanuel and ASP Isaiah and the injuries inflicted on the police team.

Manzah stated that the FCT Commissioner of Police, Bala Ciroma, had condemned the attack on the policemen.

He noted that investigation into the incident was in progress.