The spread of the deadly Coronavirus in China has become a cause of concern for immigration and port health officials. 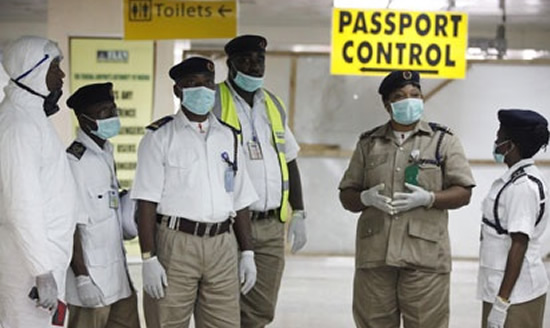 The Nigeria Immigration Service and Port Health Services have expressed fears over the outbreak of Coronavirus in China.

The deadly disease, which broke out in  the Asian nation  sometime last month, has spread to eight countries including United States and Singapore, with over 800 people  infected and 30 killed in the past few weeks.

Immigration and Port Health Services officials, said hundreds of  the Chinese  who left Nigeria  for China to celebrate their annual festival – Lunar New Year – would  start returning to Lagos, Abuja and other parts of the country from next week.

As such, they expressed fears  of  the possibility the  Asians  contracting the disease and bringing it into the country.

The immigration, port health and other airport officials, who spoke with Saturday PUNCH in separate interviews at Lagos, Abuja and Port Harcourt international airports,  were also worried that Nigerians who frequent the Nigeria-China routes  for business might import the killer virus into the country if care was not taken.

Some officials of Port Health Services, a unit under the Ministry of Health, said the risk of importing the virus into Nigeria could not be completely ruled out since there was  a window period of 10 days during which infected persons might not manifest any of the known symptoms of Coronavirus.

According to them, the thermal scanners installed at the airports are expected to alert them whenever any passenger with body heat  exceeding 37 degrees passes under it.

The known symptoms of Coronavirus are fever,  sneezing, difficulty in breathing and high temperature.

A top official of the PHS said, “You know the way we do things in Nigeria, our own approach is always ‘fire brigade’. What we have here are what we were supplied during Ebola crisis by international donor agencies.

“My worry is that Monkeypox is also a problem in Nigeria. As of last month, we had 182 cases with nine confirmed death.  Lagos State is even having  the highest number with about 30 per cent. So my fear now is that on a daily basis we have Chinese coming into our  country.  Coronavirus broke out in December and people have been coming in. Some of them might have visited the cities where this virus is (in China) and they are already here in Nigeria. The scanners at the airports cannot capture them during the window period. The window period is about 10 days.  During this period, our scanners may not detect any infected person because the symptoms are not there yet.”

A PHS official at the Nnamdi Azikiwe International Airport, Abuja, said he was worried that health questionnaires were not being administered on China passengers.

He  said this had  increased the possibility  of the disease coming into the country.

Our correspondents, who  visited the screening point at  the Murtala Muhammed International Airport, Lagos, on Thursday and Friday, observed that health questionnaires were not administered on passengers arriving from China  via Ethiopia Airlines, Emirates, Qatar Airways and Egypt Air, among others.

An immigration official at the MMIA  feared  Nigerian traders who frequent the Nigeria-China route could be infected by Coronavirus.

He said, “Chinese are not the only people to give us concern, we have Nigerians who travel to China for business. They return on Emirates, Qatar Airways, Egypt Air.”

A top Immigration official at the Nnamdi Azikiwe International Airport noted that Chinese nationals would start coming back to the country in large numbers  soon.

He said although the airport authority was collaborating with other health institutions to track those suspected to have contracted the virus at entry  points, he was worried it might not be watertight, especially when Chinese who travelled start returning to the country.

He said, “FAAN is working together with other health authorities to track anyone suspected to have the virus. They have installed equipment that captures the temperature of all visitors entering the  airport. For now, there are no threats. This is because the Chinese  are  not coming in large numbers; they travelled out in large numbers recently for their Lunar New Year holiday. But very soon, they will start coming in. You know that their New Year is different from ours. This is why  we need to be more careful because the risk will be higher.”

Another PHS official at the Lagos airport noted that the country had yet to acquire the reagent to diagnose the virus.

The official said, “Even for monkeypox cases that we are recording in the country, we have to take the specimen abroad for  confirmation test.   We are just making noises here, we don’t have anything on the ground.

“For now, there is no designated place in any of our airports for quarantine. The centre in Yaba has quarantine; the  airport is supposed to have but we don’t.”

The health official said  basic health facilities problems at the airport had been there for a long time.

The official said, “As I am talking to you, we have only one doctor in Lagos and we run more than one shift. Abuja has  a doctor  and  I think there is one  in Kano. Lagos airport needs more than one doctor. Sometimes when we have emergency at the night, we will  be running around. We may have to call a doctor from the state government (hospital).”

The official, who also emphasised the importance of the health questionnaires on inbound passengers, said, “Between the time the virus gets to somebody and the time the virus starts manifesting, there is no how thermal camera can detect that. The person will not even show any sign of the virus during the incubation period.

“This is where the health form is important.  With that form, we can know the passengers who visited certain places in China in December. Even such passengers would be called later for us to monitor whether they are down or not.  We also have health management’ form and we have health workers’ form.”

Also, a top official of FAAN at the Port Harcourt International Airport expressed fear  that the disease could spread to Nigeria, calling on  the Federal Government to make further measures to ensure that it  did not spread to the country.

The source said, “There is fear; one cannot rule out that. But it is now left for the Federal Government to know what to do concerning this. There has been this sensitisation that if you have high temperature or you are feeling cold or feverish, go to  hospital to assess the situation and see if it is  Coronavirus or Lassa fever."