The incident happened at Guduf Nagadiyo in Bulabaulin, Gwoza. Soldiers from 192 battalion of the Nigerian Army later cordoned off the mosque. 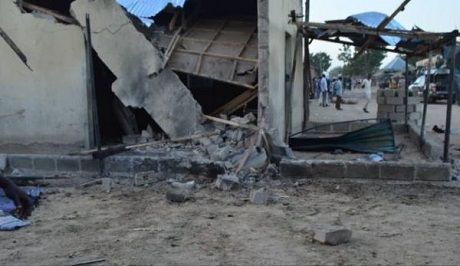 A security source, who disclosed this to TheCable, said the suicide bombers forced their way into the mosque while prayer was ongoing.

The source said before some persons in the neighbourhood raised the alarm, the attackers had already gained entry into the mosque.

The incident happened at Guduf Nagadiyo in Bulabaulin, Gwoza. Soldiers from 192 battalion of the Nigerian Army later cordoned off the mosque.

A resident said the suicide bombers might have infiltrated the town during a wedding which held at the palace of the emir of Gwoza on Saturday.

Borno has been the worst hit in the resurgence of Boko Haram attacks in the north-east. Many villages along Damaturu-Maiduguri road in Borno have been attacked by Boko Haram insurgents.

In a statement on Sunday,  Aminu Iliyasu, media coordinator of army operations, said many attacks on civilian targets in Borno have been foiled.

“Troops have resolved to sustain efforts until all the remnants of the Boko Haram/Islamic State’s West Africa Province insurgents are completely wiped out,” he said.

According to him, the insurgents sneaked into the peaceful community in five gun trucks, motorcycles and a number of “foot soldiers”.

“They used a farm as cover with the heinous intent to unleash one of the most devastating terror attacks in recent times. “Fortunately for the residents, the vigilant troops responded swiftly, engaging the criminals with overwhelming superior firepower, thereby forcing them to beat a hasty retreat in complete disarray,” he said.

“During the ensuing pursuit and exploitation embarked upon by the troops, one Boko Haram criminal suicide truck driver strapped with a suicide vest was neutralised. Items captured during the encounter include one AK 47 Rifle, one FN Rifle, one motorcycle and one heavily laden Vehicle Borne Improvised Explosive Device with deadly explosive materials.”

Iliyasu added that on Friday, troops of the same battalion deployed in Ngala bridge repelled another Boko Haram attack on their location.

He disclosed that the insurgents were engaged by the troops and inflicted heavy casualty on both their men and equipment.