A man who killed his four kids after a quarrel with his wife has been sentenced to death by hanging. 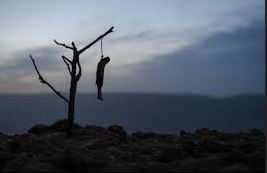 A 53-year-old man, Saleh Magaji, has been sentenced to death by hanging by a court in Kaduna for slaughtering four of his children after a quarrel with his wife in November 2015.

Saleh and his wife had an issue the night before the dastard act but she fled the home located on Ahmadu Bello Street in the Kawo area of Kaduna, the state capital, in the middle of the night. In anger, Saleh locked the door of the house and slaughtered four of his children who were between the ages of six and one. He thereafter tried to kill himself.

One of his children who was not in the house at the time, alerted the ward leader of the area after he couldn't enter their home. The police was invited and when the door was broken, the children were found dead while their father was still alive but in a critical condition.

Saleh was later arraigned before the court in a case of murder between himself and the state.

The court held that Saleh was convicted based on circumstantial evidence provided by 7 witnesses beyond reasonable doubt. He was therefore sentenced to death by hanging on all 4 Counts and also convicted on the 5th Count Charge of attempt to commit suicide.