Some children, who were playing around the scene of the incident, saw the woman when she dumped the baby. 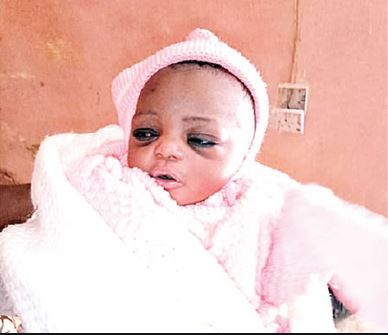 According to a report by Punch Metro, a yet-to-be-identified woman, on Tuesday, dumped a two-day-old baby girl on the road opposite the Central Mosque in Minna, Niger State.

It was gathered that after dumping the baby, the woman mounted the motorcycle that brought her to the area and fled the scene, where the baby was discovered.

It was learnt that some children, who were playing around the scene of the incident, saw the woman when she dumped the baby.

The children were said to have alerted their parents and a woman, Fatima Adamu, rescued the baby and took her to the Niger State Child Right Protection Agency.

Adamu said people were scared of moving closer to the baby after they were informed that a woman dumped her, adding that she sought the intervention of a vigilante in the area to pick up the baby and take her to the police station.

She stated, “My neighbours called me to the scene and when I got there, I saw people gathered around the area, where the baby was dumped. I was told that an unknown woman, who disembarked from a motorcycle, dumped the baby and fled on the same motorcycle.

“I noticed that everybody was afraid to touch the baby, because the little children playing outside the house were the ones who saw the woman when she disembarked from the motorcycle and dumped the baby. When the children saw that a baby was moving, they immediately informed their parents and neighbours, and everyone rushed to the scene.”

She explained that she sought the assistance of a member of the vigilante corps to pick up the baby and reported the matter at the Central Police Station, Minna.

A police officer on duty attended to Adamu and the vigilante at the station and assisted in bathing the baby after discovering that she was newly born.

Speaking to Northern City News, the police officer said, “When they came to the station with the baby, I noticed she was not bathed after birth. It was as if the mother just gave birth to the baby and immediately dumped her.

“I pleaded with a woman that lives close to the station to assist me with hot water and I bathed the baby. The baby was left in cold and was not doing well. I had to take her to the hospital on Sunday.

“The baby was under my care since Saturday night that she was brought to the station before we took her to the Child Right Agency.”

The Director-General, Niger State Children Right Protection Agency, Mariam Kolo, said, “We are calling on anyone, especially those living around the area, who know of any woman who was pregnant and was delivered of a baby within the last three days and hasn’t been seen with a baby to report to our agency.”

Kolo expressed gratitude to the good Samaritan and promised to work with relevant government agencies to give the child the best of care.