At least fifty women have stormed the Ebonyi state government house to protest against the government's decision. 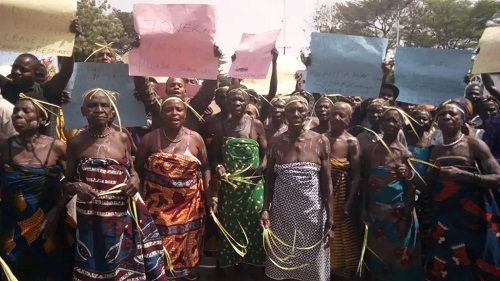 Ebonyi state women protest in front of government house
Aged women numbering over fifty on Wednesday occupied the front of the Ebonyi state government house to half-naked protesting an alleged confiscation of their mineral deposits.
According to Daily Post, the protesters stormed the front of the government house at the early hours of Wednesday to register their grievances to the governor, Chief David Umahi.
They were carrying placards with the inscriptions: “Gov. Umahi please save us because you are our last hope, we don’t need JEP-JAF(John Nwenyi) in Ndiezoke Igbegu village, John Nwenyi (JEP-JAF) our dear village is not a war zone.
“Stop bringing Army and Police to our village, Stop instigating crisis in Ndiezoke Igbegu village,” etc.
Meanwhile, the helpless villagers were accusing one John Nwenyi, who is the former monarch of the village but was dethroned by the former governor of Ebonyi state.
Nwenyi is currently serving as a member of the state elders council.
The leader of the protesters, Dr. Christian Nwagbaga who spoke to journalists while chanting warlike songs said “we have a solid mineral deposits in our village, and it was discovered since 2014. We have somebody by name John Nwenyi who is a former Eze of igbegu.
“We have a common boundary with them but since we discovered this mineral deposits in our village, Nwenyi never allowed us to rest. Since 2015, Nwenyi wants to mine the place but we told him no. He brought white men with police and loaded them in his car and forced himself into the place.
“He tried to survey the place by force. But after that, we told him that enough is enough and that he should not try to come here again. We asked him, are you surveying the place for what? Is it on our own consent or is the governor away of it?

“We told him that there is a procedure for mining which we know that he has not followed. We wrote a letter to the commissioner of police and commissioner for solid mineral and copied the governor. But he came with a bulldozer to enter the place to start work by force. But we succeeded in stopping him on the way.
“He came again three days ago with police and Army loaded in his cars to force himself again into the site. He has been threatening the entire village. We decided to come here and protest to the governor to come and save us from this situation” he stated.
The commissioner for internal security, border peace and conflict resolution, Chief Stanley Okoro Emegha, while addressing the protesters assured them of the governor’s preparedness to stop Nwenyi from encroaching into their land.
“This war is not your war. And the condition we are seeing you people are not good, especially the way this women dressed. It is not acceptable by the government.
“From today onward, that man will not enter that place again. It is an assurance from the governor. He is not happy that you people are coming at this condition. You will be satisfied the way government will handle this matter,” he stated.
Meanwhile, all efforts to reach the former monarch, John Nwenyi at the time of filing this report failed as his phone numbers including that of his son were switched off.
Top Stories

Why NFF Made Yobo Eagles' Assistant Coach - Pinnick Speaks Up