The story has been told of the 104-year-old woman living in agony after being rendered homeless by land grabbers. 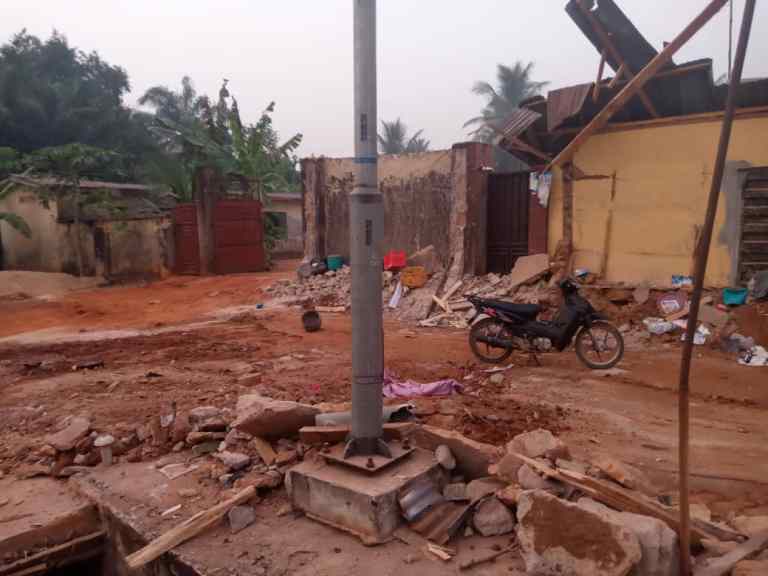 For centenarian widow, Mrs. Margret Onwuelo from Umuenem Otolo Nnewi, Nnewi North Council of Anambra State, life can never be the same again. This is because her home and life-long savings were destroyed by wicked land grabbers who demolished her house.

Currently living at the mercy of neighbours, distraught Mrs. Margret Onwuelo has sent a Save Our Soul, SOS, message to Governor Willie Obiano of Anambra State to come to her rescue and save her from further threat from her attackers.

The 104-old woman lamented that in addition to being homeless, she lost everything she and her late husband worked for and blamed her frustrating fate on unnamed people close to the family members who she said had long wanted to take over the land she said was acquired by her late husband, 67 years ago.

In the course of demolishing the house, the perpetrators also looted a provision store in front of the house which was also demolished.

Narrating her ordeal, Ma Onwuelo attributed the demolition of her home to land tussle, saying that she has been under intense pressure from some highly placed people close to her family members to give up the land which she refused.

According to her, she acquired the land way back in 1953 with her late husband, Chief Edward Onwuelo with 50 pounds. She said trouble started when some people became desperate to take over the land following the death of her eldest son.

The house, it was learned, was demolished by sponsored hoodlums with a bulldozer allegedly hired by those interested in taking over the land, who dispatched them to carry out the hatched job.

According to information from the community, the hoodlums who were mostly strangers and many in number, arrived the area and hanged around till their sponsors came around and from a distance of about 100 meters, pointed at the house for them to commence demolition.

“They pulled down the fence, broke the provision store in front of the house and took all the provisions and drank off all the beer, the hot drinks, all the soft drink as well and cigarettes. They finished everything including the money inside the shop, nothing was left”, a member of the community who witnessed the act from a distance said.

Mama Onwuelo cried out that the perpetrators want her dead so that they can take over the land but praised God that she narrowly escaped their wicked act but said that she lost everything inside the house including her medications.

According to her, at the moment she is surviving through the help of her neighbours and relations who were eyewitnesses to the demolition.

She, therefore, called on Governor Willie Obiano, well-meaning people of Nnewi, philanthropists, Churches and NGOs to come to her aid.

However, SEV learned that some suspects have been arrested in connection with the demolition by the Anambra State Police Command and concerned citizens of Nnewi have urged the police not to handle the matter with levity no matter the position of the conspirators.