Nigerian senator, Senator Enyinnaya Abaribe has thrown more light on his political life and roles in shaping opinions in Nigeria. 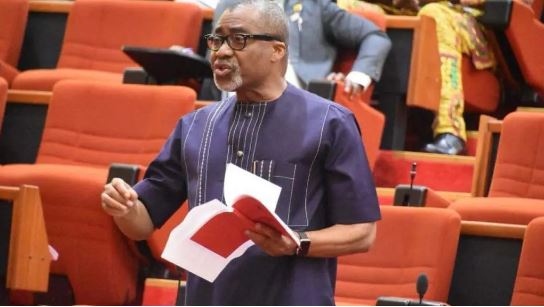 Senator Enyinnaya Abaribe
As soon as we settled down for the interview in his office at the National Assembly, my first question to Senator Enyinnaya Abaribe, the Senate Minority Leader, was to tell me about the three attempts to impeach him when he was the Deputy Governor of Abia State and the circumstances that surrounded his resignation from that office in 2003.
He explained that he and Governor Orji Uzor Kalu, were sworn in on May 29 1999, and by August of the same year, things had begun to go awry between them. There were three attempts to impeach him: the first was in August 1999 but after he responded to the charges by the State House of Assembly within the statutory 14 days he was exonerated. The second attempt was in mid- 2000. The House wrote to him again to respond to some charges but without giving him the statutory 14 days to reply, went ahead to write the Chief Judge of the State to constitute an impeachment panel against him. He refused to appear before the panel but instead challenged the proceedings in court on two grounds – that due process was not followed and that he was denied fair hearing.
The court ruled that it did not have the jurisdiction to hear the case. He appealed against the judgment but the Appeal Court upheld the judgment of the lower court by arguing that the “the judiciary should not descend into the murky waters of politics”. Though he narrowly escaped impeachment when the Abia State House voted on the matter, he argued that one of the fallouts from the Appeal Court judgment was a rash of illegal impeachment of Governors – Peter Obi in Anambra State, Joseph Dariye in Plateau and Rasheed Ladoja in Oyo State. He said it was only when Ladoja was impeached by the Oyo State House of Assembly by less than the number of lawmakers required by the Constitution that he went to the Supreme Court, which reversed the impeachment on the ground that due process was not followed.
“The Supreme Court essentially held that the court is not supposed to interfere in the decision of the House of Assembly, but only in so far as they follow due process”, he said. On the third attempt to impeach him in 2003 he decided to resign because by then he had “been suspended and frozen from the party”. He sent his resignation letter by courier on March 7 2003 and decamped to another party to challenged Orji Kalu in the 2003 Abia State Governorship election – but lost.
“One of the unfortunate things that happened however was that the young man who innocently received my DHL mail and signed for it was sacked.”
On the real cause of the quarrel between him and Governor Uzor Kalu, he demurred, promising that the details would be in his forthcoming book – though he mentioned that one of the reasons was that “the new set of governors had military mind set and Governor Orji Kalu often boasted of being one of the ‘Babangida boys.’” He said his relations with Orji Kalu these days are cordial.
I asked him to tell me more about his involvement in securing bail for Ralph Uwazuruike, leader the banned secessionist Movement for the Actualization of the Sovereign State of Biafra (MASSOB) in 2007, and of Nnamdi Kanu, leader of IPOB, whom he stood surety for.
He explained that when Ralph Uwazurike was arrested and detained, the Southeast caucus of the Sixth Senate led by the late Uche Chukwumerije decided to go and see late President Yar’adua – whom he called a “great man”. With Yar’adua they made a fairly simple case for Uwazuruike and MASSOB: those talking about Biafra were essentially crying out because of certain policies of the federal government which gave the impression that the Igbo are being treated unfairly in this country. They advised that the best way to deal with such agitators was not to round and lock them up and then throw away the key but rather to engage them in dialogue with a view to discussing their grouses and finding out how they thought such could be remedied. They were eventually able to secure bail for Uwazuruike and they (the South-east senators) stood sureties for him without any monetary condition being attached to his release.
Culled from TheCable
Top Stories