A senior official of the Kwara State Ministry of Finance has been apprehended for scamming job seekers. 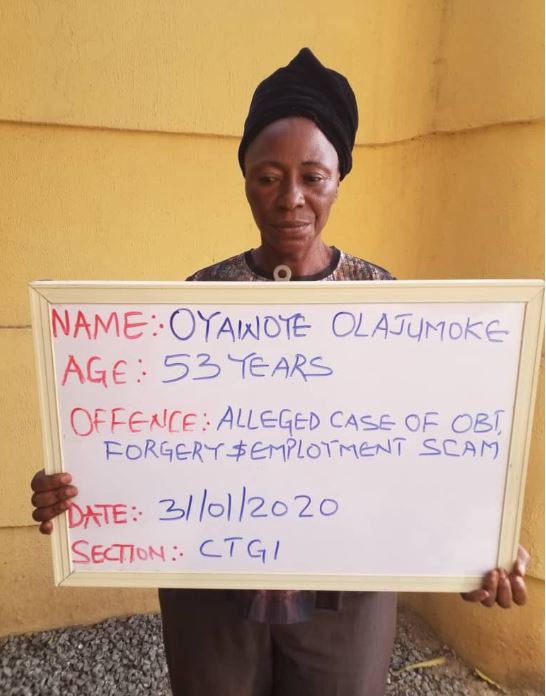 Mrs. Olajumoke Rhoda Oyawoye
The Economic and Financial Crimes Commission (EFCC), Ilorin Zonal Office has arrested a senior official of the Kwara State Ministry of Finance, Mrs.Olajumoke Rhoda Oyawoye, for allegedly defrauding many job seekers under the guise of helping them to get a job in both federal and state employment.
A statement by Head, media and public affairs of the EFCC, Wilson Uwujaren, said that Oyawoye, a level 14 officer with the Kwara state ministry of Finance allegedly received various sums amounting to about N3 million from her victims who are seeking for jobs and issued them a fake offer of appointments.
Trouble started for the Senior Kwara civil servant when two separate petitioners approached the Ilorin zonal office of the anti-graft body, accusing Mrs. Oyawoye of claiming that she had been helping people to secure employment in federal parastatals and state civil service.
According to the petitioner: “I met her on the 27th April 2018 in my Church in Offa, she informed me and other Church members that she used to help people get employment at the Kwara State Civil Service Commission and Federal Government Parastatals, she told me that the money for the State Employments is N250,000 per slot while the one for Federal Government parastatals is for N350,000."
Top Stories