A woman has made history in Ekiti state after being appointed as the Head of Service by the Govenror. 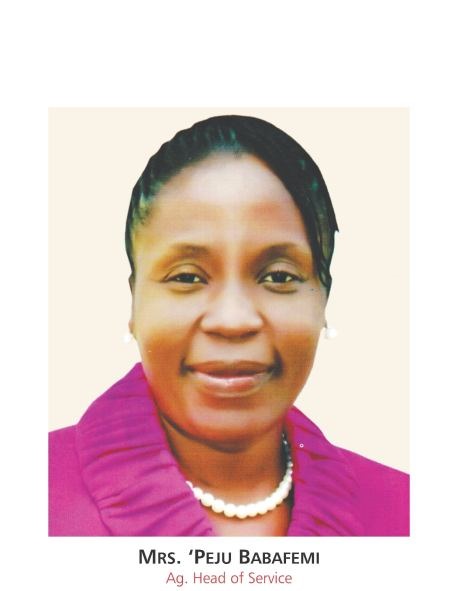 Mrs Morenike Olapeju Babafemi has emerged as the first female Head of Service in Ekiti state Civil service after her appointment was approved by Governor Kayode Fayemi yesterday.
Mrs Babafemi, who has had a stint as Acting Head of Service, before proceeding on an overseas training programme last year, was until the new appointment, a Visiting Research Fellow at the African Leadership Centre, School of Global Affairs, King’s College, London, United Kingdom.
Her appointment as Head of Service takes effect from Monday, February 10, 2020.
She is to take over from Mr Ayodeji Ajayi, who retires from the civil service on February 9, 2020, having attained the mandatory retirement age.
Meanwhile, Governor Fayemi has commended Mr Ajayi for his diligence and professionalism which has helped in repositioning the state civil service for effective service delivery.
Mrs Babafemi, is the first female to be appointed substantive Head of Service since the creation of Ekiti State on October 1, 1996.
She started her career as an Administrative Officer with the old Ondo State Civil Service on June 30, 1987.
She rose through the ranks to become a Permanent Secretary in October 2009 and has served as Permanent Secretary in several ministries including Ministry of Women Affairs; Ministry of Local Government; and the Cabinet and Special Services Department.
The new Head of Service is to be sworn in on Monday, February 10, 2020.
Top Stories