A man who was just recently released from prison has been arrested after he attempted buying an iPhone 11 with a fake alert. 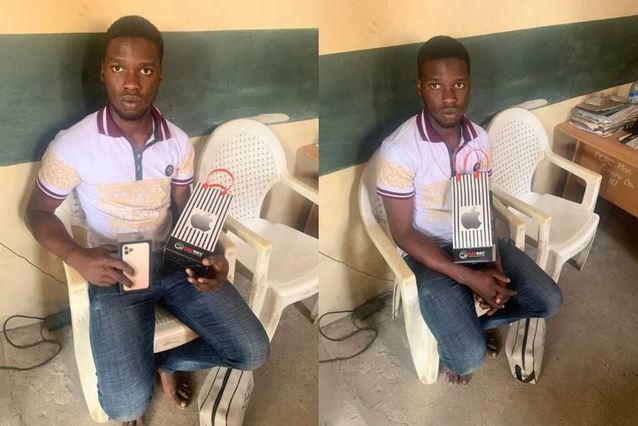 Man who was caught buying phone with fake alert

A man who claims he just got out of prison was caught after he attempted buying two iPhone 11 Pro with a fake bank credit alert in Ikeja, Lagos state.

The man was caught red handed at Computer village after he tried buying the two iPhone 11 pro with 900 thousand naira fake bank credit alert after which he started begging for mercy.

He begged the dealers who he wanted to scam not to take him back to prison as he just got out of there recently. In a video being shared on social media, he can be seen prostrating and begging for them to have mercy.

Another dealer, Hephvic, who had in the past fallen victim of the said scam, he revealed that this isn’t the first time the suspect has been caught in the act.

Hephvic revealed the suspect’s name as Akeem. He said, Akeem tried duping him with a ‘fake alert’, December, 31st 2019

Man who just got out of prison buys Iphone11 Pro with fake alert. They caught him and he’s begging not to be jailed. pic.twitter.com/gwSsdDFXY0