Ousted former governor of Imo state, Emeka Ihedioha has hired 30 lawyers to present his case at the Supreme court. 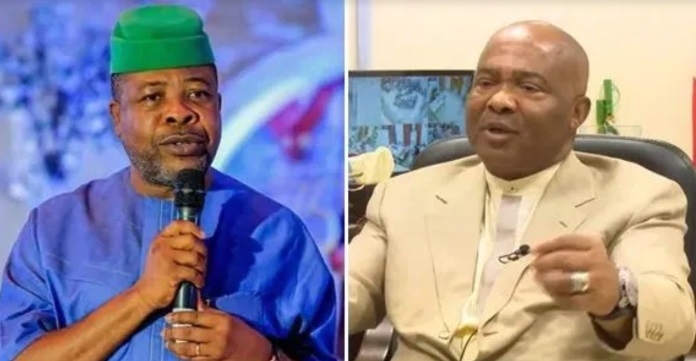 Emeka Ihedioha and Hope Uzodinma
A former governor of Imo State, Emeka Ihedioha has hired 30 lawyers to present his case as he asks the Supreme Court to review its earlier judgement sacking him.
On Wednesday he also asked the Supreme Court to reinstate him as the duly elected governor of Imo state and sack Hope Uzodinma.
This is coming three weeks after the Supreme Court sacked Emeka Ihedioha as Governor of Imo State.
On January 14, Justice Kudirat Kekere-Ekun delivered the lead judgment and declared Senator Hope Uzodinma of the All Progressives Congress (APC) winner of the governorship contest that held on March 9, 2019.
Addressing newsmen in Abuja, Ihedioha said he filed an application yesterday, with only one prayer: that the earlier decision be set aside.
He said he had already hired over 30 lawyers, led by a former Attorney-General of the Federation, Kanu Agabi, to represent him at the Supreme Court.
Speaking on behalf of Ihedioha, immediate-past Attorney-General of Imo State, Mr. Ndukwe Nnawuchi, told newsmen that they were hopeful that they would be vindicated at the end of the legal battle.
“On Wednesday, Emeka Ihedioha and the Peoples Democratic Party (PDP) put together a team of lawyers to study the judgment of the Supreme Court. That team has studied the judgment and has advised Ihedioha accordingly.
“Following their advise, Ihedioha and the PDP instructed the team of lawyers to approach the Supreme Court with an application to set aside its earlier judgment delivered on the 14th of January, 2020.
“I want to inform you that (yesterday), the team of lawyers filed the case. The relief being sought is to have the earlier judgment set aside on the ground of nullity. The details have been canvassed. The Supreme Court will reach a decision one way or the other."
Top Stories