The party said the swearing-in of the candidate of the Peoples Democratic Party as governor is unconstitutional as he did not meet the mandatory constitutional requirement. 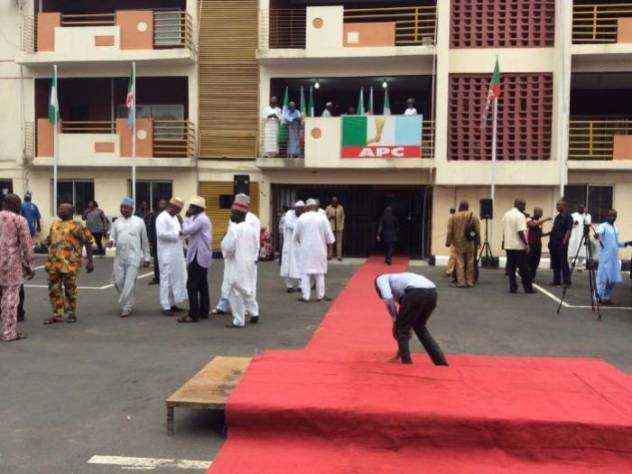 According to Premium Times, the ruling All Progressives Congress has demanded a fresh election in Bayelsa State.

The party said the swearing-in of the candidate of the Peoples Democratic Party as governor is unconstitutional as he did not meet the mandatory constitutional requirement.

The national chairman of the party, Adams Oshiomhole, in a letter of appeal to the Independent National Electoral Commission, affirmed the supremacy of the Supreme Court nullification of its governorship candidate’s victory, but argued that the sworn-in candidate, Duoye Diri, also failed to meet the mandatory requirement to become the governor.

The letter, which was forwarded to the national chairman of INEC, was titled,’ Judgement in Appeal No: SC.1/2020 between Peoples Democratic Party Request for conduct of fresh governorship election in Bayelsa State’.

It said the court judgement did not void the votes that the APC polled at the election and the implication of this is that the votes of the party must be reckoned with.

‘’Kindly recall that the Governorship election in Bayelsa State was conducted on the 16th November, 2019 and our great party, the All Progressives Congress, duly participated at the said election. You will also recall that the All Progressives Congress emerged victorious at the election leading to our Lyon David Pereworinimi being declared and returned as winner of the election,’’ the letter reads.

‘’Our attention has been drawn to the judgement of the Supreme Court delivered on 14th February 2020 in the pre-election appeal filed by the Peoples Democratic Party(PDP) and its governorship as well as deputy governorship,’’ Mr Oshiomhole wrote.

‘‘In the said judgement of the Supreme Court, the candidature of our governorship and deputy governorship candidates were nullified and the commission was ordered to issue fresh certificate of returns with the highest number of votes and with the required geographical spread.

‘’It is however to be noted that the Supreme Court did not void the votes that our party polled at the election and the implication of this is that the votes of the All Progressives Congress must be reckoned with in determining whether any other candidate polled majority of lawful votes cast in one-quarter of at least two thirds majority of the state.

‘‘We have reviewed the judgement of the Supreme Court and we are of the firm opinion that the candidates of the Peoples Democratic Party cannot be issued certificate of return and or sworn in as the Governor and Deputy Governor of Bayelsa State respectively.

‘‘We are aware of that section 179(1)(b) of the 1999 constitution of the Federal Republic of Nigeria mandatorily requires a candidate for an election to the office of governor of a state to have not less than one quarter of the votes cast at the election in each of at least two thirds of all the local government areas in the state before the candidate can be deemed to have been duly elected as the Governor of the State. This mandatory requirement was affirmed by the supreme court in the judgement under reference.”

“From the results announced and duly published by the commission, it is clear that no candidates meet this mandatory constitutional requirement, including the candidates of the Peoples Democratic Party who only managed to poll one quarter of the votes cast in only five local government areas,” the APC said.

The party said its position is fortified by the fact that there is a condition precedent to the winner being issued a certificate of return.

“The candidate of the Peoples Democratic Party or any other candidate whatsoever, none satisfies the requirement of one quarter of the votes cast in at least 2/3 of the local government areas in the state as required by the supreme court judgement further request that a fresh election be conducted by the commission for the office of the Executive Governor of Bayelsa State,” the letter highlighted.