It was a sad sight to behold as Malian striker, Moussa Marega was racially abused in Portugal. 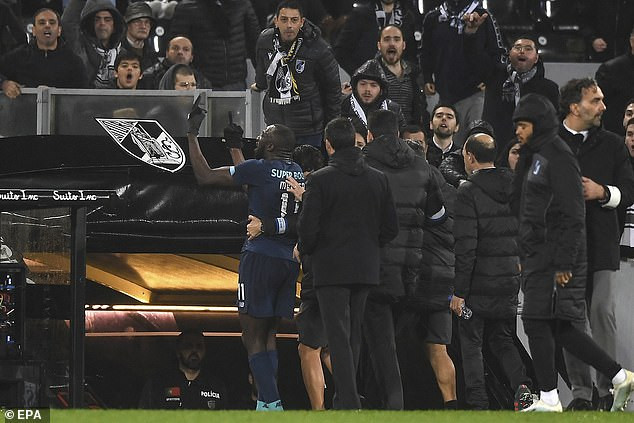 Moussa Marega tells racist fans to f**k off.
A game in the Portuguese Primeira Liga division between Porto vs Vitoria Guimaraes was marred after Malian striker, Moussa Marega was racially abused by Vitoria SC fans after he scored his side's winner on Sunday.
When the 28-year-old striker scored in the 60th minute, he celebrated his goal by pointing to the colour of the skin on his forearm, which prompted monkey noises and chairs to be thrown from the stands.
Marega even celebrated with one of the discarded plastic seats but then made his way to the side of the pitch, with his thumbs down and seemingly booing the home supporters.
He was shown a yellow card for the reaction and after the abuse continued he attempted to angrily leave the pitch, but was restrained by his teammates and opposition players, including Porto coach Sergio Conceicao.
The Malian striker who spent a season on loan at Vitoria in 2016-17 was later substituted in the 72nd minute and replaced with Wilson Manafa.
After the final whistle, Marega took to Instagram to blast the racist supporters: 'I'd like to tell those idiots that came to the stadium to shout racist abuse... go f*** yourself.
'I also want to congratulate the referee for not protecting me and showing me a yellow card because I'm defending my skin colour.
'I hope I never meet him again on a football pitch!! YOU'RE A DISGRACE!!!' 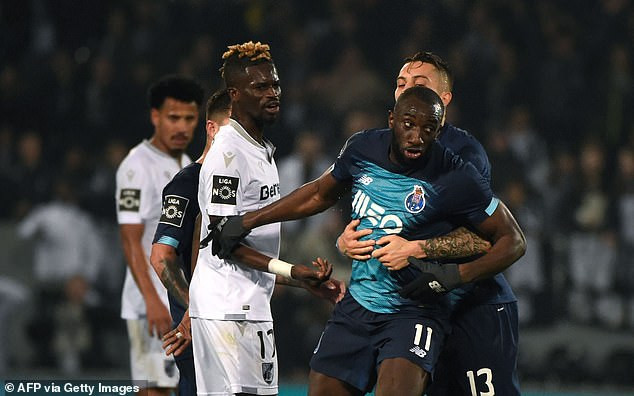 His coach, Conceicao also spoke about the incident while speaking in his post-match interview.
He told reporters: "We are completely indignant,"
"They insulted Marega since the warm-up. We are all a family here, regardless of our nationality, skin colour, height or the colour of our hair and we all deserve respect. What happened here is outrageous.
"I know the fans here are very passionate about their club and many fans are not represented by some of the people who were in the crowd today."
Watch the video below:

Moussa Marega incident for those that haven’t seen it, 100% within his rights to want to leave the field. FC Porto, Sérgio and the Liga need to stand by him and make sure that this incident goes punished.