A Nigerian journalist who spent 174 days in detention has finally regained freedom today. 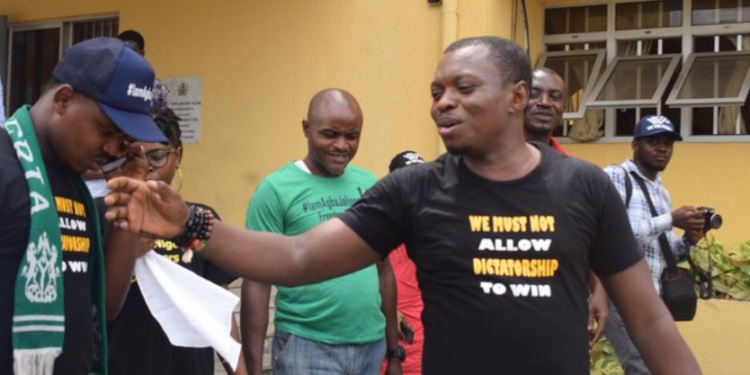 Agba Jalingo after his release today
Nigerian journalist and publisher of CrossRiverWatch, Agba Jalingo, has been released from custody after spending about five months in detention.
Jalingo had spent 174 days in detention before a federal high court in Calabar granted him bail in the sum of N10 million.
He was, however, freed on Monday after perfecting the bail conditions.
Jalingo was first arraigned on August 22, 2019 after he published a story on how Ben Ayade, governor of Cross River, allegedly approved and diverted N500 million meant for the state’s microfinance bank.
Following an outcry, Ayade had denied involvement in the trial of Jalingo, but said the federal government was behind the journalist’s case over his involvement in the #RevolutionNow protest led by Omoyele Sowore.
Jalingo was charged with conspiracy, terrorism, treasonable felony and an attempt to topple the state government.
The journalist was denied bail on two occasions by Simon Amobeda, a judge, who was caught in a leaked audio saying the journalist’s life was in the court’s hands.
After the recording was made public, Jalingo asked the chief judge of the federal high court to reassign his case.
Amobeda later recused himself from the matter following allegations of a lack of fair trial by the journalist.
See video below:

Agba Jalingo sings ALUTA CONTINUA after release from prison. Thank you everyone that spoke up on this. It can be anyone. pic.twitter.com/COSGFSIpMT