A man has been shot by the police following a protest takeover of the community in Isheri Oke area of Lagos. 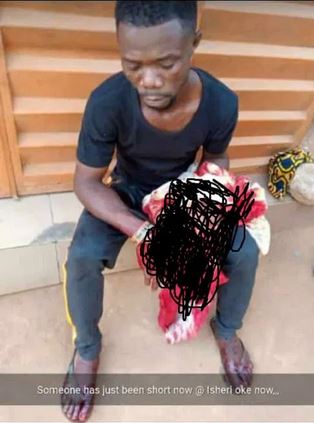 The Police, Monday, shot a youth in Isheri Oke, Kosofe Local Government Area of Lagos State, who was protesting the takeover of the community by one Prince Michael.

The incident occurred at about 1pm, while youths in the area attempted to prevent some policemen and a court sheriff, from placing an order allegedly from a Lagos High Court.

In the process, son of the head of the market (Iya Loja), in the area, simply identified as Seun, was shot in his left hand.

The court sheriff had yesterday, placed a Public notice in the area, notifying residents of the area that possession of the land in Isheri Oke and environs, near Olowora, had been taken.

The notification which was sequel to a judgment in suit No ID/1352/2001, between Prince Micheal Adesegun Bakare and two others, versus O. Asafa and eight others, was delivered by Justice Candide Johnson of the Lagos High Court sitting in Ikeja on May 3, 2016.

Justice Johnson had in the judgment granted an enrolment order for the consequential relief of possession of all the parcel of land situated at Isheri Oke and environs, near Olowora.

However, residents alleged that the police and the court sheriff came with some thugs, thereby prompting youths in the area to resist the move

An eye witness, Mrs Temitope Shittu, explained that “When the court Sheriff and policemen, with the thugs were trying to place the notice, youths in the area tried to stop them and in the process, they (youths) hauled stones and bottles at the Police.

“Some shots were fired by the Police, a bullet hit Seun, who was rushed to Mayflower hospital. But he was rejected there. He was then taken to another hospital: Tomade hospital in Ojodu Berger where he is at the moment”, She said.

Eyewitnesses also said that the police fled the scene, abandoning, three of their vehicles.

All persons who are on the land through unauthorized families or entities are hereby warned that their act and or continue stay on the land is illegal unlawful and malafide.

Contact the undersigned within 14 days from the date of this notice. Possession taken today 17/ 02/2020, by order of court.