Displaced individuals who were refused entry into major IDP camps in Maiduguri now hibernate on street corners in search of food and water. 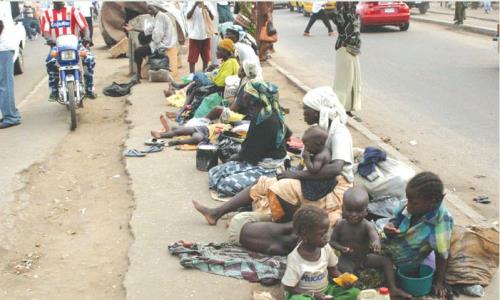 Borno State government has provided accommodation for about 300 households and residents of Kayamla village who fled their homes and are taking refuge in streets across Maiduguri, Borno State.

The displaced, numbered about a thousand and mostly women and children said they were forced to leave their homes following attacks by suspected Boko Haram insurgents that hits in neighbouring villages.

It is observed that, despite efforts by the government to end street begging in the capital, the influx of displaced persons into the state capital has continued to increase.

This is owing to the fact that displaced individuals, refused entry into major IDP camps in Maiduguri now hibernate on street corners in search of food and water.

Many of the displaced now survive on street begging while the young women amongst are turning them are now alleged to engage in the sex trade for shelter.

Speaking on the number of influx of displaced persons, the Chairperson, Borno state emergency management agency, BOSEMA, Hajiya Yabawa Kolo, said as soon as the state government got to know of their predicaments it arranged accommodation for them at the Stadium IDPs camp.

She said, of the over 1000 people who recently turned in to Maiduguri to seek refuge from fear of attack, women and children top the lists.

According to the Chairperson, Governor Babagana Umara Zulum is doing everything to ensure adequate provisions are put in place to cushion the sufferings of displaced individuals in the state.

“Government will continue to do its best, but you know that the problems are enormous. The Governor had on many occasions slept in the IDP camp with the displaced trying to monitor how they are being catered for.” She added.