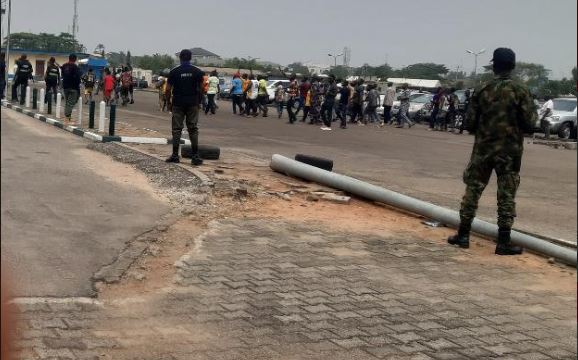 According to The Nation, security operatives on Saturday barred protesting youths from getting close to the convoy of National Chairman of the All Progressives Congress, Comrade Adams Oshiomhole.

Heavily armed security personnel were mobilised to the Benin Airport following reports that youths were at the airport to boo Oshiomhole.

At the Airport entrance gate, there are soldiers and two police vehicles while others comprising officials of the Department of State Security, Nigeria Security and Civil Defence Corps were stationed at various points of the Airport.

The airport exit gate was also manned by soldiers and policemen.

An armoured personnel carrier was seen at the airport parking lot.

The youths chanted anti-Oshiomhole songs and used other unprintable words.

At the airport to receive Oshiomhole were Dr. Pius Odubu, General Charles Airhiavbere and other APC chieftains.

Some APC chieftains who refused to be names accused Governor Godwin Obaseki for activities of the youths.

It was gathered that the heavy mobilisation of security personnel was to forestall any attempt to boo Oshiomhole or prevent him from leaving the airport.

A top Edo government official who pleaded anonymity denied involvement of Obaseki in the airport incident.

According to the official, “Oshiomhole should leave Obaseki out of his predicament. If Oshiomhole go to Portharcourt or Bayelsa, you know the reception he will receive.

“Didn’t you see protest against him in Abuja? Was that also Obaseki? Oshiomhole has general dislike across tje country. Oshiomhole’s travail is self inflicted.”

In December last year, 15 supporters of the APC loyal to Governor Godwin Obaseki were hospitalized after soldiers and policemen escorting some dignitaries including Oshiomhole that were to attend a political rally in the state fired shots at them

The APC supporters were carrying out a peaceful protest and had set bon fires along the Airport road when the soldiers opened fire on them.

It took Oshiomhole more than two hours to get to his residence that day.