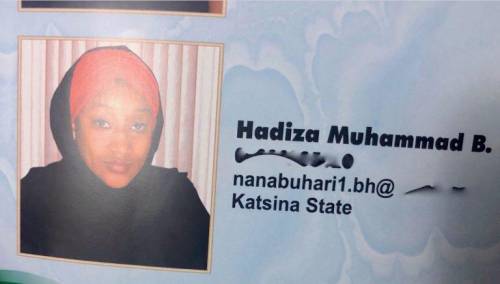 Hadiza Buhari
Despite efforts by persons in government to deny the employment of President Muhammadu Buhari’s daughter, Hadiza, into Petroleum Products Pricing Regulatory Agency, fresh facts have emerged on how the secret recruitment took place.
Earlier in February, some contract staff of the PPPRA raised the alarm that Hadiza had been employed into the agency as deputy manager along with children of other top and highly influential persons in the country
After the news hit the airwaves, the Presidency swung into action, denying that the claim was “untrue, malicious, and meant to cast aspersions on the first family”.
However, SaharaReporters has now gathered that Hadiza’s employment was facilitated by the new Executive Secretary of PPPRA, Abdulkadir Umar Saidu.
To clear the way for the employment of Hadiza and others, Saidu had to sack at least 34 contract staff, who had worked with the agency for over seven years.
Before the appointment of Saidu as Executive Secretary of PPPRA, the former occupant of that office, Mrs Sotonye Iyoyo, had secured an approval to regularise the employment of 134 contract staff and also employ more qualified Nigerians into the agency.
However, as is the norm in most federal ministries and agencies in Nigeria, management and board of PPPRA decided to share the slots amongst themselves and cronies rather than throwing it open to the general public.
The employment slots were allocated to powerful individuals in the executive, legislature, and judiciary arms of government in the country.
Further investigations revealed that the reason why no management staff was willing to challenge the present Executive Secretary on most of his obnoxious policies and high-handedness was because of an issue of money laundering and covert fraud of N2bn withdrawn from the agency's coffers by the General Manager Admin/HM – V.Z Shidok, who acted as ES at a time.
Culled from SaharaReporters
Top Stories