Some aides of the Vice President sacked by President Buhari late last year have been recalled. 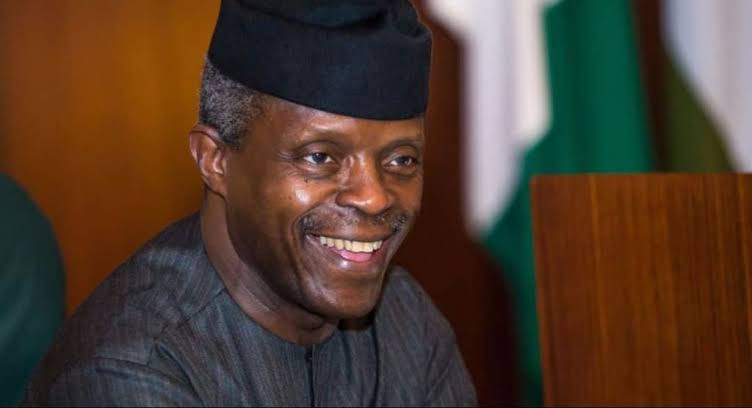 VP, Yemi Osinbajo
Some aides of Vice President Yemi Osinbajo, who were unceremoniously relieved of their duties late last year, have been recalled a report by Daily Independent has revealed.
The report revealed that instead of returning to their previous posts in the Pres­idential Villa, the aides have been rede­ployed to various ministries where they were assigned new roles by the supervising ministers.
Speaking on Tuesday evening, one of the af­fected aides said some of them were recalled in December 2019 while some also got redeployed in Janu­ary 2020.
“We have all been recalled but not to our former posts. We have all been redeployed to ministries and we will be reporting to the ministers. We are no longer under the Office of the Vice President. It is not what we expect but it is better than what happened before when our ap­pointments were terminated abruptly.
“Some of us were recalled late last year while some of us got our letters in January this year. I have since returned to Abuja and resumed in my ministry.”
Also speaking, another of the affected aides said it took a serious intervention from prominent Nigerians before they were recalled.
“It was just divine because we have all lost hope. The me­dia also did not help matters as they were reporting that there is a rift between the vice president and the presi­dent and he may resign or be impeached.
“But we thank God for his grace and the intervention of eminent Nigerians including our then boss, Vice President Yemi Osinbajo, who really fought for us to be recalled. I have also resumed in a min­istry”, she said.
When Daily Independent contacted some ministries, some top officials confirmed that some of the affected aides are in the ministry.
A top official in the Minis­try of Information and Cul­ture said, “Yes, some of them are with us here. They re­sumed in January this year”.
Another top official in the Ministry of Transport also confirmed that some of the af­fected aides were redeployed to the ministry.
The names of the affect­ed aides are: Ajibola Ajayi, daughter of former governor of Oyo State, Isiaka Abiola Ajimobi. She was appointed Special Assistant (Legal) to the President (VP’s Office) in August 2019. She was a former SA to the President on Bureau of Public Enterprises (BPE) (VP’s office), from October 2015 to May 2019.
The others are Lanre Osinbona (SSA, ICT); Imeh Okon (SSA, Infrastructure); Jide Awolowo, grandson of Obafemi Awolowo (SA, Oil and Gas); Lilian Idiaghe (SA, Research, Legal and Com­pliance); Arukino Umukoro (SA, Niger Delta); Bala Liman Mohammed (SSA, Economy); Edobor Iyamu (SSA, Niger Delta); Dolapo Bright (SSA, Agro Allied Value Chain); Toyosi Onaolapo (SA, Com­munity Engagement); Gam­bo Manzo (SA, Political); Bisi Ogungbemi (SA, Politi­cal Matters); Edirin Akemu (SSA, Industry, Trade & In­vestment); Akin Soetan (STA, Economic Matters); Aondaver Kuttuh (Technical Assistant, Rule of Law); Ife Adebayo (SA, Innovation), and Yussuf Ali (SA, Power Regulations).
The rest are Tola Asekun (SSA, National Boundary Commission); Morakinyo Beckley (SA, Off Grid Pow­er); Yosola Akinbi (SSA, NEC); Tochi Nwachukwu (SA, Power Privatisation); Bode Gbore (SSA, Political); Abdulrahman Baffa Yola (SA, Political); Kolade Sofola (SA, Infrastructure); Ebi Awosika (STA, Community Engage­ment); Muyiwa Abiodun (SSA, Power); Forri Samson Banu (SA, Entrepreneurship); Bege Bala (SA, BPE); Feyishayo Aina (SA, Community En­gagement); Halima Bawa (SA, Community Engagement); Nkechi Chukwueke (SA, Com­munity Engagement), and Ilsa Essien (SA, Media).
The sack, according to re­ports, was masterminded by President Buhari’s Chief of Staff, Abba Kyari.
The incident which hap­pened while President Buhari was abroad jolted the sacked aides as their access tags were reportedly seized by officials of the Department of State Services (DSS).
One of the affected aides had lamented last year that they had suffered physical, emo­tional, financial and psycho­logical trauma by their sack which, they believed, was done without President Bu­hari’s knowledge.
It would be recalled that the presidency, while reacting to the rumoured sack in a state­ment by Garba Shehu, Senior Special Assistant to the Pres­ident on Media and Publicity, had said an unprecedented overhaul of the nation’s seat of government was ongoing and had resulted in a number of political appointments ei­ther revoked or not renewed in Buhari’s second term.
The exercise, which, ac­cording to him, was ordered by the president, was meant to streamline decision-making, cut down multiple authorities and reduce the high cost of ad­ministering the nation.
“It is also an appropriate re­sponse to the general percep­tion that the presidency has an oversized and bloated work­force, which acts as a drag on efficiency,” he had said.
Upon his return to the country, President Buhari explained that the aides were not sacked but they were rede­ployed to a new ministry.
He described what hap­pened as a re-organisation and not a sacking, stressing that, a new ministry has recently been created, that is, Minis­try of Humanitarian Affairs, Disaster Management and Social Development.
“They said 35 people were sacked in the Vice President’s office but we just created a ministry and we reorganised but people are giving it an eth­nic and political dimension. It is unfortunate,” the president had said.
Top Stories