Nigerian international, Odion Ighalo has banged in his first goal for his new club, Manchester United. 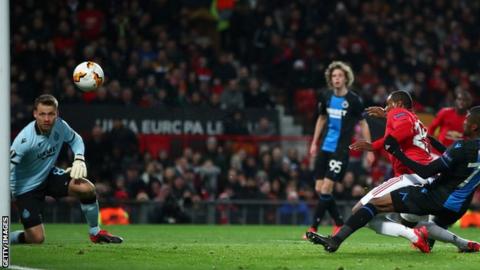 Odion Ighalo scores his first goal for Manchester United
Odion Ighalo scored his first goal for Manchester United as they cruised into the Europa League last 16 at the expense of Club Bruges with one of their best performances of the season.
Bruno Fernandes scored his second United penalty in a week after Simon Deli was sent off for a ludicrous handball to block Daniel James' shot.
The Portuguese, who was at the centre of everything, had a hand in the second as he lifted a pass over the top to Juan Mata, who squared for full debutant Ighalo to tap in from six yards.
And Scott McTominay, making his first start following an injury, side-footed in a third to wrap the tie up before half-time.
Fred scored his first two goals of the season in the final 10 minutes as United got the big scoreline their performance deserved.
Club Bruges brought thousands of noisy fans to Old Trafford to help with a good atmosphere - but their players could not match their efforts and created nothing of note.
The draw for the last 16 takes place on Friday at 12:00 GMT - with United able to face any of the other teams left, including Wolves and Rangers.
Ighalo goal highlight of dominant United display
If United were to draw up a blueprint for the perfect half, it would probably have been something like "goals for the January signings and the hometown favourite on his full return from injury. Oh, plus a red card so we only have to play the second half against 10 men".
United were excellent - although Bruges did not look as dangerous as they did in the 1-1 first-leg draw - with the Old Trafford faithful appreciating what they were watching.
The undoubted turning point of the game was when Deli dived to stop James' effort with his hand - even though goalkeeper Simon Mignolet was diving behind him.
He was sent off - a decision upheld after a long VAR delay which did not seem necessary - and Fernandes kept his composure to stroke home his penalty with a stuttered run-up, just as he did against Watford.
Boyhood United fan Ighalo, a January loan signing from Shanghai Shenhua, made his first start because of an injury to Anthony Martial and took advantage by scoring into an empty net.
The biggest cheer of the night was probably for McTominay, who guided the ball home from 20 yards following Fred's cutback. It was his first start after two months out with a knee injury.
The game seemed to be drifting to a close until Fred stepped up to score twice - first converting Jesse Lingard's cross from close range and then scoring from the edge of the area from Tahith Chong's pass.
Can United go all the way?
The fans sang manager Ole Gunnar Solskjaer's name as United blew Bruges away.
The convincing victory will get supporters wondering whether they can win the trophy they lifted in 2017 - and the Champions League place that comes with it.
They are only three points behind fourth-placed Chelsea but this does give them a fallback plan.
A European trophy for Solskjaer to add to his Norwegian titles with Molde would be welcome too.
Based on this performance against a smaller team, and some of United's showings against the big boys under Solskjaer, there is no reason for them to fear the likes of Inter Milan, Roma, Sevilla or Bayer Leverkusen.
Who is left in the Europa League?
Rangers
Shakhtar Donetsk
Roma
Inter Milan
Wolfsburg
Manchester United
LASK
Olympiakos
Basel
Sevilla
Bayer Leverkusen
FC Copenhagen
Istanbul Basaksehir
Getafe
Wolves
Red Bull Salzburg or Eintracht Frankfurt
Man of the match - Bruno Fernandes (Man Utd)
-BBC Sports
Top Stories