Two Nigerian politicians have been reportedly detained inside prison for allegedly insulting a state governor. 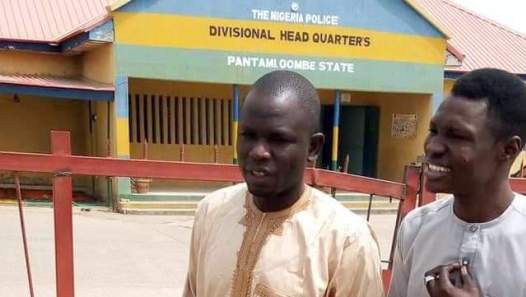 Two members of the opposition Peoples Democratic Party (PDP) in Gombe State have been detained in prison following their arraignment in court for allegedly insulting Governor Inuwa Yahaya.

Gombe is the latest state to join in the harassment of social media and opposition voices over criticism of their governors.

PREMIUM TIMES has reported how governors across the country are increasingly targeting opponents and social media users for allegedly insulting them.

Atiku Boza-Boza and Adamu Babale are being detained on the orders of an area court following their arraignment on allegations of “conspiracy and intentional insult”, according to court papers seen by PREMIUM TIMES.

The police at Pantami Division of the metropolis arrested and detained Mr Boza-Boza on Wednesday over undisclosed complaints.

An associate of Mr Boza-Boza, Adamu Babale, who went to the police station to secure the bail of his fellow party man was also detained.

The two were then taken before the Area Court in Pantami in handcuffs on Thursday on charges of conspiring to abuse Mr Yanaya.

The police accused the two PDP stalwarts of calling the governor “leader of promise breakers” according to the Police’s First Information Report (FIR).

The alleged offence, according to the charge sheet, is contrary to Section 96 & 155 of the Penal Code Law.

The two politicians were docked before the court on Thursday, a day declared as work-free for all courts in the state.

A circular dated February 24, 2020, by the state’s acting chief judge, Muazu Pindiga, had issued a directive on all courts in the state to close down on February 26th and 27th.

The holiday, according to the circular seen by PREMIUM TIMES, was to enable “smooth running of the commissioning exercise of the new Court of Appeal Gombe Division”.

But despite the holiday, the two suspects were taken before the court in what the opposition leaders in the state said was a premeditated action.

Speaking to PREMIUM TIMES by telephone, a spokesperson for Mr Yahaya said the governor was not behind the travail of the two PDP members.

“This is not true. The governor did not order the arrest of anybody. If they have issues, it must be with another person, not the governor,” Abdullahi Misilli said Sunday morning.

Mr Misilli described the alleged role of the governor as “antics of the opposition”.