A gospel musician has narrated the sad experience she had with some accident victims recently. 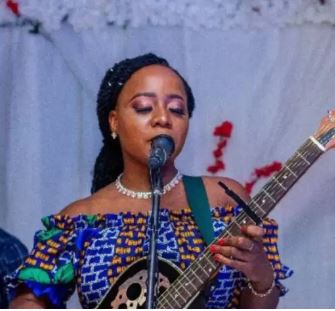 Blessing Tangban
Gospel singer, Blessing Tangban has recalled the sad encounter she had trying to help an accident victim even after he was rejected by two hospitals.
According to Blessing Tangban, she picked up the victim after he was hit by a car. Her resolve to see him treated gingered her to continue to search for a hospital even after he was rejected twice.
Blessing Tangban wrote:
“Guys, usually I wouldn’t do this, but my heart is completely broken tonight because of the state of the medical system in our country. Tonight a guy was hit by a car on the express. I had to carry him in my car to ensure he got medical care because everyone else was just watching.
We got to the first hospital & they turned him.away during to “lack of drip”….. (my mind was blown…. a hospital? Turning away a dying man?) K….. we went to the second hospital, they said the emergency center was quarantined & the only doctor around refused to come out….
I was upset because everyone was standing & watching us, this man was bleeding the whole time & I legit thought he’ll die anytime soon, so after arguing uselessly, we took him to national hospital where he is being attended to. I just got to my house now, it’s 2:33am.
I’m tweeting this for few reasons..when you see a disaster, take action, dont just stand & watch..Nigerians are great at being bystanders & they were a lot of them tonight. Secondly, our medical system has cost so many families their loved ones. How can a hospital not have drip?
How can a hospital close down its emergency center without providing alternatives? How many people have died due to “we dont have drip, we dont have bed space, doctor is not around…” or all the other excuses these hospitals give everyday? Are we saying that only 1 hospital in the FCT is equipped to Hndle medical care of any kind? Common! What if this guy had died in our hands tonight? It would certainly not be because we didn’t take him to the hospital, itll be that the hospitals weren’t prepared to do their jobs. Is this our reality?
UPDATE: thank you all for your response, love and concern for this young man. He is conscious now but still not speaking. According to the doctors he’s suffered multiple fractures on both his hands & legs and will need Xray, MRI and blood transfusions. Let prayers go up for him.
The men who hit the boy were with me yesterday helping & have been doing their best to foot this young man’s medical Bills in a society where many would have run away. If you would like to support them, please do. They didn’t plan the accident, but they’re taking responsibility”.
Top Stories