Details have emerged how a 36-year-old woman killef her own mother by cutting off her head with a knife. 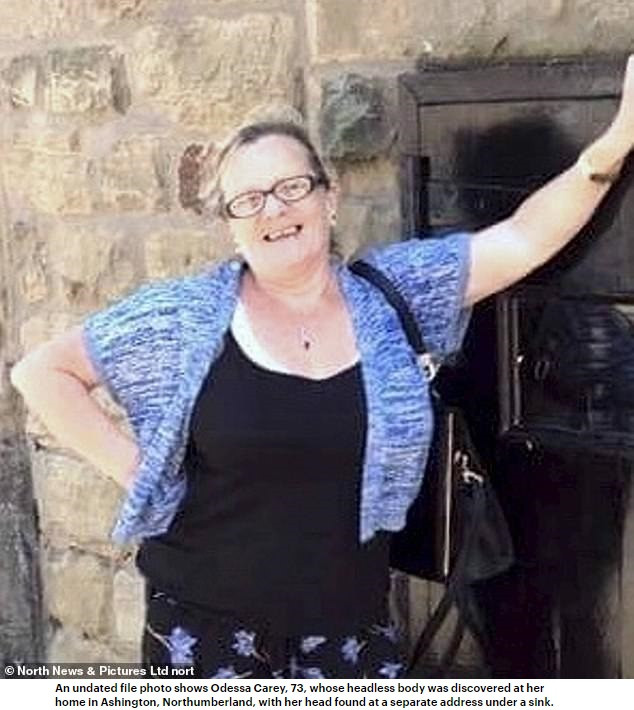 Odessa Tammy Carey
A court has heard how a 36-year-old woman murdered her own mother of 73 by decapitating her with a knife and scissors before removing her brain and kissing it in front of a family friend.
It was gathered that Odessa Tammy Carey carried out the act after beating her mother Odessa Carey to death at her home in Ashington, Northumberland.
After beating her mother to death, Ms.Odessa reportedly used a knife and scissors to cut off her head, removed her brain and cut a cross shape into her abdomen.
Newcastle Crown Court heard today that the killer daughter carried the severed head around in a carrier bag and brought it out and kissed it in front of a family friend.
It revealed in court that the headless corpse of the 73-year-old was found on her bed and her brain was in the bathroom at her home in Ashington, Northumberland. Her head was found at a separate address, in a cupboard under the sink, at a house where police found Carey Jr hiding.
The killer daughter has been charged with murder but is too unwell to face trial for a criminal offence, leaving Jurors to now decide whether Carey did the act of killing but not whether she is guilty or not guilty.
Prosecutor Nicholas Lumley QC told the court that Mrs. Carey Sr, who used a mobility scooter to get around, was found dead on April 8 last year.
Mr. Lumley said: 'On her bed, in her own home, lay Odessa Carey Sr's body. Her head was missing and her abdomen, her tummy, had been cut open to expose the inside of her stomach.
'In the bath in the house, in a plastic container, there was blood and there were parts of brain tissue.
'There was also implements; a large pair of scissors, knives and a mallet.'
According to Mr. Lumley, police went to an address in Guide Post, Northumberland, and found Carey hiding in a loft.
He added: 'In a cupboard under the sink at the address in Guidepost police found a human head, wrapped in a pillowcase, in a towel, inside a carrier bag.'
The court heard the day before her mother's body was found, Carey had taken the head to a friend's allotment.
Mr. Lumley added: 'She was sitting in his shed. This time she was wiping up blood from her hands and her arms using one or more baby wipes. She had a bag with her and from the bag, she carefully took a parcel, of sorts, the contents wrapped in a pillowcase in a towel, from which she produced a human head.
'Odessa Carey spoke and kissed her mother's forehead before carefully re-wrapping the head in its shroud, putting it back into the bag.'
The court heard it was the head injuries, which may have been caused with a mallet hammer, that caused the death.
Mr. Lumley said Mrs. Carey's head was removed using 'knives and scissors' after she was dead.
'Her body was then turned over and her abdomen cut open, in the shape of a cross. Her head wass then taken into the bathroom, where the brain was removed from the skull and the mallet was washed.'
Mr. Lumley said Carey's DNA was found on the handle of the mallet hammer.
He added: 'The head was wrapped up in the bathroom before being taken from the house.'
The trial continues.
Top Stories