Dangerous criminals have been nabbed after police officers raided a kidnappers' hideout in Calabar. 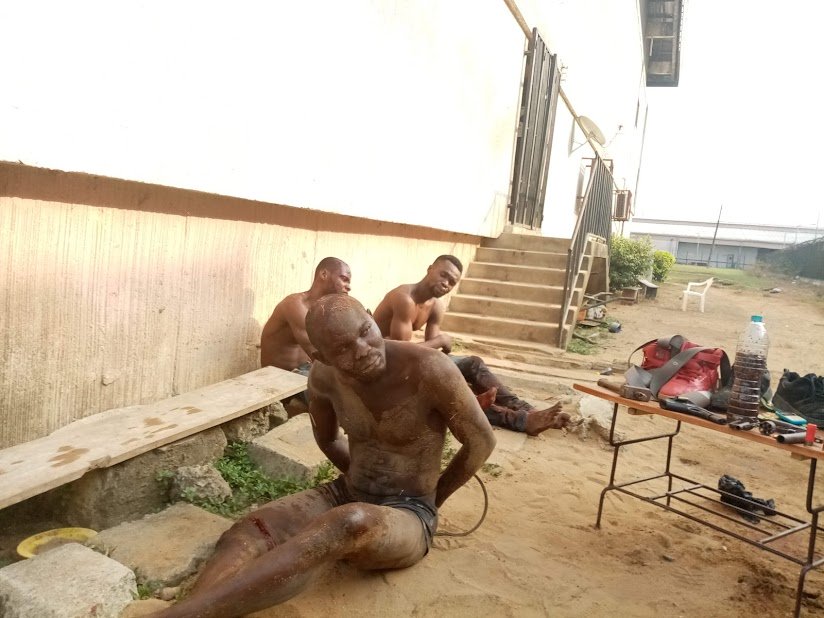 According to a report by The Nation, the Nigerian Police in Cross River State, recorded another feat in Calabar, the State capital as they raided a hideout for a gang of kidnappers; a story building located off Etta Agbor Street, in the heart of the town.

A businesswoman who was kidnapped the previous day was rescued and three suspects were arrested after a gun battle.

Another three or four of the suspects, escaped but they are under trailed. The Commissioner of Police (CP) Nkereuwem Akpan told newsmen when he paraded the suspects with dribs and drabs of blood from gunshot wounds on their bodies.

CP Akpan who led the police team on the operation, told newsmen that they got a tip-off about the building and swung into action after gathering intelligence.

According to him, the previous day, the suspected kidnappers had adopted and raped a university student, female and later freed her.

“The Police stormed the building and fortunately a businesswoman who was kidnapped 24 hours earlier was rescued in a corner of the premises with her hands and legs tied”.

He said about three or four of the suspects escaped but with the three we have, we have gathered information and “others will soon be caught”.

The rescued woman gave her name as Mrs. Grace Adams. According to her, she is a businesswoman and runs distributorship for a beverage company.

Her words, “Yesterday, on my way from work, my husband picked me in his car, as we entered the gate, they came in and just picked me and took out of my compound in my husband’s car.”

“We stay at 46 Joseph Ekpang at Ikot Ansa. They did not beat me. They just tie me up and they demanded that my husband should pay N30 million. They picked me yesterday around 7.15pm.”

“This morning, I started hearing gunshots inside the building. I was so scared. I thought they have come to finish me. I discovered that it was the Nigeria Police. The Anti-Cultism and Anti Kidnapping team that stormed the building. One of them saw me where they tied me and kept, in one small place and he asked me what I was doing there, I told him I was kidnapped yesterday in the night; that was how he brought me out of the place. They brought me here and called my husband to come and my daughter.”

“I have never known the Nigerian Police can work so efficiently and effectively. May God Almighty continue to bless them and protect them in the work they are doing,” they rescued victim prayed.

One of the suspected Kidnappers confessed to newsmen that he was part of the gang that kidnapped the woman. He gave his name as Aruk Iso, saying that he was a graduate of Electrical and Electronics Engineering from Cross River State University of technology.

He words, “I needed money to do my clearance in school and I decided to join my friends. I am not the leader of the group. The leader is UB – Ubong. He succeeded to escape and put me into this trouble”.

Another, among the three suspects caught and paraded before newsmen, Abasi-Ima Edet Akpan by name only claimed to belong to the same confraternity with the gang members but that he was not part of the operation to kidnap the woman.

“I only went to the building to sleepover. I do laundry business. When I got to the building, I saw the woman tie to a corner and I was told she was their recent job. I pitied the woman and even assured her they will not manhandle her.”

Confessing further, the suspect said none of them is a student. “They are all graduates.”