A man has caused some serious stir in Kebbi state when he rushed to touch President Muhammadu Buhari. 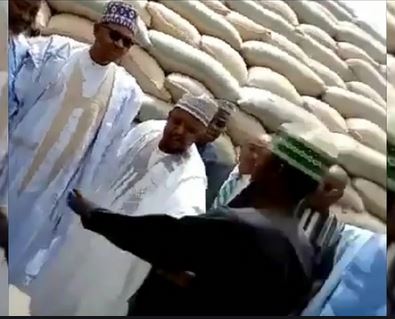 The man tried to grab the predident

The Punch reports that there was a dramatic twist to the visit of President Muhammadu Buhari to Kebbi State on Thursday as a man attempted to jump at him.

However, security operatives moved in quickly to stop him from reaching the President.

A video trending online showed the unidentified man rushing at Buhari in a location where the President and other personalities appeared to be set to inspect some agricultural produce on display.

But, his Senior Special Assistant on Media and Publicity, Mr Garba Shehu, told journalists that the man was “unusually excited” on sighting Buhari and wanted to touch him.

“I was told that somebody was trying to reach the President out of excitement. And he didn’t know the security implications of that approach.

“People who where there, our photographers; that was what they told us,” Shehu stated when he was contacted last night.

The spokesman added that he was not at the venue himself and could not give an eyewitness account.

Buhari had visited Kebbi State on Thursday to attend the opening ceremonies of the Argungu Agricultural and Fishing Festival.

The festival, usually held annually, had been suspended in the last 11 years, owing to security challenges in the North.