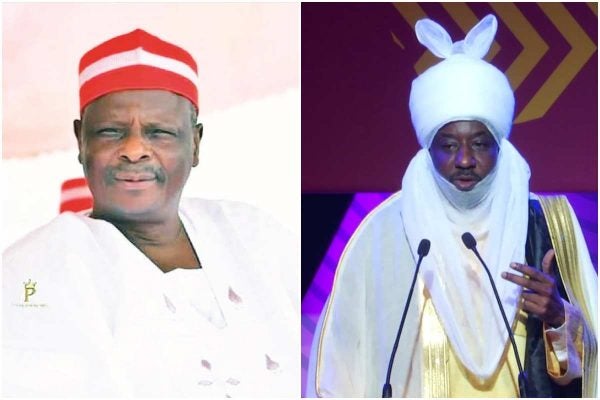 Rabiu Kwankwaso and Deposed Emir Sanusi
Rabiu Musa Kwankwaso, the former Governor of Kano state has dismissed allegations that he issued queries to the deposed of Kano, Muhammad Sanusi II during his tenure as governor of the state.
He made the clarification while speaking to BBC Hausa News, monitored in Kano on Wednesday.
According to him, “l have never issued a query to His Highness the Emir of Kano “.
The spokesman of Governor Ganduje Salihu Yakasai spoke in Osogbo, that the deposed Emir Sanusi was queried three times by the administration of former governor Rabiu Kwankwaso for disrespecting tradition.
Kwankwaso also denied the allegation that Kwankwasiyya loyalists have contributed in the raging feud between Governor Ganduje and Sanusi.
He explained that Sanusi’s sin against Ganduje was his statement that whoever won the 2019 governorship election in Kano state should be given his mandate.
Kwankwaso, however, described the dethronement of Sanusi as a sad incident to Kano, Nigeria and the world at large, stressing that,” Sanusi is a global citizen.
He further, described the recent removal of Muhammadu Sanusi II as Emir of Kano by the state government as unconstitutional.
According to him, “it is an act of impunity which is also beyond the powers of the state Governor alone.
He expressed dismay over the way and manner the Emir who he described as a global figure was treated, insisting that it was a violation of his fundamental rights as provided by section 35 of the constitution of the country.
“Honestly speaking what happened on Monday the 9th of March 2020 is a sad thing for the entire people of Kano, Nigerians and the entire people of the world because the dethroned Emir is a global figure because of the struggles he lead in his entire life especially when he served as the CBN governor and this job at the Kano Emirate.”
“On this day, we have seen very annoying things especially the way impunity and disregard to the constitution and the laws were implored in dethroning His Highness the Emir of Kano. We see this action as totally unjust.
“More so, the way we saw the deployment of security agents, it is clear that this is beyond what a state Governor alone can do. Despite the intervention of his (Sanusi II) lawyers seeking for him to be allowed to move to Lagos where he chose, he was forcefully put in a plane and taken to the remotest place in the country and after some plea, he was taken to another part of the same Nasarawa state.
“But even as you have chosen to use impunity to dethrone him, l wish to remind you that this is a democratic dispensation and not military regime,” he said.
Top Stories