The story has been told of how vigilantes and hunters saved some UNIBEN students and lecturers from killer herdsmen. 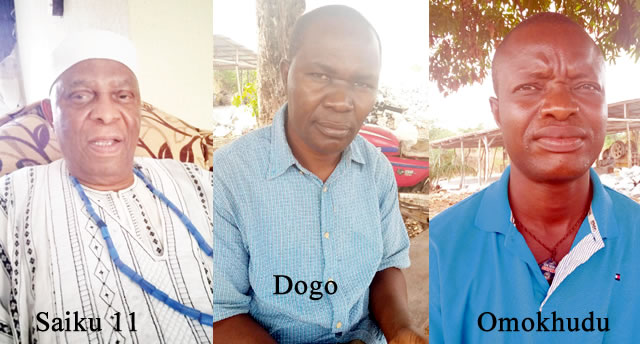 Prof Christopher Akujieze was in the lecture room with about five PhD students on the ground floor of the Faculty of Science building at the University of Benin, Edo State, when our correspondent arrived to interview him.

After the teaching session, the quiet lecturer, who is the Head, Department of Geology, came out to meet a group of young men waiting for him outside the class. He had a brief meeting with them and then led our correspondent to his office on the same floor of the building.

After few walks, we arrived at the entrance to his door. As he opened the door, he passed some instructions to his students and then dropped the load in his hand on a chair.

“Yes, geology is a hazardous profession because of the fieldwork and everything. Or is it easy for somebody to abandon their home, to leave their safe habitat to explore, return to the laboratory and then quantify?” he queried.

Few days ago, 15 students and three lecturers of the department on their way to Akoko-Edo part of the state for fieldwork–led by Akujieze were kidnapped by suspected Fulani herdsmen.

That day around 5pm when the kidnappers struck, the sun was already setting but the scorching heat was biting. The students and lecturers were by the roadside on Igarra road after Ikpesi in Akoko-Edo. Tired and famished, with bottles of water in their hands, they had hoped to retire to the camp where Akujieze was waiting for them.

Our correspondent visited UNIBEN to speak with Akujieze few days after the release of the victims, but he refused to talk about the incident, stating he needed permission from the university’s vice-chancellor.

But one of the students, who spoke on condition of anonymity, said she had taken a walk down the road away from the bus while others were waiting for the driver when the incident occurred. She said it was not up to five minutes when she left her colleagues that she received a phone call from one of them, saying, “We have been kidnapped.”

The student told Saturday PUNCH she initially thought it was a joke but when she started calling others, it turned out to be true. She said she wondered if she was dreaming because she had just left them not quite long then. The student said she ran back to the road only to discover that her colleagues and teachers were not there.

She stated, “The bus driver was with another student watching from a distance how the armed men rounded up my colleagues and our lecturers and marched them to the bush. Immediately, the driver and the student ran to a vigilante checkpoint some distance away to report the incident. Soon, the report of the incident got to the head of the vigilance group in Igarra, Mr Ibukun Dogo, who promptly mobilised his men and some hunters to the forest after informing the Otaru of Igarra.”

Speaking about the incident, Dogo said, “On that day, my men who were on the road called me to inform me about the incident. They said a man with a school bus reported that some students and their lecturers were kidnapped.

“I told them to give the phone to the driver and we spoke. The driver told me that four armed men kidnapped the students but he was lucky to escape because he was far away from them when the incident happened.

“He said they went out to survey and were about returning when the abductors took their people away. I told the driver to lead my men to the spot so they could trace them immediately.”

Dogo said when the vigilantes and hunters got to the scene, they saw some hand towels belonging to some of the students apparently dropped on the ground as they were being marched to the bush. He added that they immediately began search in the forest while waiting for the police to arrive.
Speaking about the development, the Otaru of Igarra, Emmanuel Saiki II, said when information got to him about the kidnap of the UNIBEN students and their lecturers, he felt it would be an embarrassment not only to the university but also the entire country.

“We quickly sent the hunters and the vigilantes into the bush to capture the kidnappers. Luckily, we were able to rescue the students and their lecturers. When the kidnappers saw that the vigilantes were chasing them with gunfire, they hurriedly left their victims and ran away,” he said.

The head of hunters in Igarra, Anthony Omokhudu, said it was during the process of exchange of gunfire that the kidnappers left their victims and fled “because we were already close to them.”

Meanwhile, Omokhudu said there had been an influx of Fulani herdsmen into the Akoko-Edo forest lately.

“You know we in Akoko-Edo are the immediate neighbours to the Yoruba. We speak Yoruba and bear Yoruba names. What we noticed is that herdsmen camps are increasing in the forest. A camp can take as much as 100 huts. We noticed six new camps from January till date. We have been able to remove five; it remains one now,” he said.

Also, Dogo said in January, a trailer load of about 300 Fulani men was intercepted by his men and sent them out of Akoko-Edo because of perceived security threat.

He said, “It was around 11:30 pm sometime in January when I received information about a trailer load of herdsmen in town. Immediately, I called my boys and some youths and we moved to the place.

“We told them to enter their truck and leave Igarra but they said two more trucks were on the way. We said they should call the trucks and send them back immediately. That night, we chased them out of Igarra.”

One of the rescued students, who also spoke to our correspondent on condition of anonymity, said they were grateful to the vigilantes and hunters who made their escape from the kidnappers possible. She said it was the exchange of gunfire with the kidnappers that got them (kidnappers) confused, so they left them and ran away.

She said, “There were seven of them. Some with guns and others with machetes. They told us to lie down. Suddenly, the ones with guns started getting violent. They took our three lecturers who wore reflective jackets. Prior to that time, they had seized our phones and money. At first, they picked me, but when we were going, they told me to go back.

“While I was going back, I noticed that the herdsmen were already beating some of my colleagues. One was hit with a sledgehammer. At that moment, two other kidnappers were watching those of us on the ground. When two of us saw an opportunity to escape, we ran to the road, took a motorcycle and went to the police station to make a report. The police told us to pay money before writing a statement.

“When we eventually took them to the scene, they said they could not enter the bush because they were policemen from Auchi and that police from Igarra would be angry if they saw them. We turned back and on our way, we saw some vigilantes who helped us.”

She said, “My friend told me that inside the bush, they encountered a man bathing in the river who’s a vigilante and that got their abductors really disturbed.

“The vigilante was the one who alerted his colleagues to their location. When the vigilantes were moving closer to us, they started exchanging gunfire and that got the kidnappers disorganised and they separated the male students from the females. It was in that commotion that they escaped.

“All of us –15 students and three lecturers–eventually arrived at the camp around 12am. Our HoD (Akujieze) was standing in the rain making calls to reach everyone of us. He was really disturbed. It was even the vigilantes who helped to locate one of the male students in the forest who missed his way. The vigilantes really helped us.”

Commenting on the development, the state Commissioner of Police, Mr Lawan Jimeta, said immediately he was informed of the incident, he deployed the tactical team to the scene.

Although he didn’t speak much about the incident because the case was still under investigation, Jimeta, added that they were able to rescue the students and the lecturers.

Jimeta said, “If something had happened to them (the victims), it would have been a disaster, but we were able to rescue them. Some suspects were arrested by the joint tactical team and the Divisional Police Officer. Investigation is still going on to determine the culpability of the people that were arrested in connection with the incident.”