Gypsy King, Tyson Fury is likely to lose his title following new allegation brought against him. 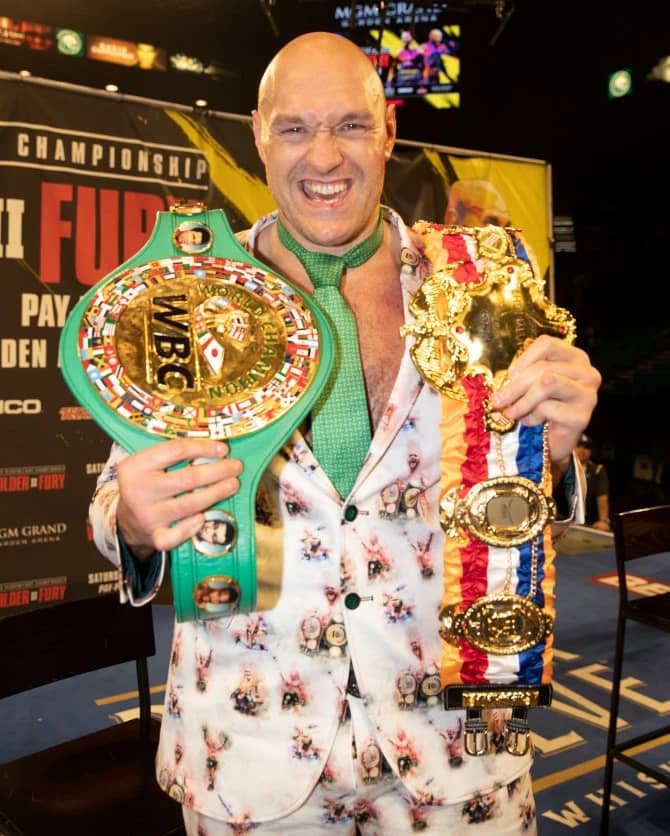 Gypsy King, Tyson Fury
Tyson Fury might likely be banned from fighting in the United Kingdom for as long as 8 years after a farmer alleged that the WBC Heavyweight champion bribed him in 2015 to claim that he supplied the boxer with wild boar meat, when he tested positive to banned steroid Nandrolone.
Fury, nicknamed the Gypsy King, was found to have illegal levels of steroid nandrolone in his blood system after his win over Christian Hammer in 2015 and was given backdated two year bans in 2017 alongside his cousin Hughie Fury who also tested positive to the substance.
Fury back then blamed the presence of the nandrolone in his system to eating uncastrated wild boar, and now the farmer who claimed to have supplied the wild meat to Fury has now come out to say he was offered £25,000 to lie that he gave the meat to Fury, an allegation that if true could see the heavyweight boxer banned from boxing in the UK for as much as 8 years.
Tampering with evidence during a probe into drug use could land an athlete into serious trouble and have devastating effects on the athlete's career.
Fury and his team have furiously denied the farmer's claims, saying he had never met the farmer before, instead saying the farmer wanted to be bribed in order not to come out with the false story.
Fury's promoter, Frank Warren after seeing the farmers claims in the media said;
“The farmer making these outrageous allegations sent me a letter last October, full of errors and basically telling me he had committed perjury by signing statements under oath and lying.
“When I called him, he asked for money. I told him to clear off and get in contact with UKAD. He chose not to speak to UKAD but instead speak to a newspaper.
“How anybody can take this man seriously is beyond belief. Tyson has never met this man in his life. What a load of rubbish.
“We’ll leave this with UKAD to look into and don’t expect it to go any further.”
Top Stories