There was a mild drama yesterday as APC governors opposed to Adams Oshiomhole engaged their counterparts in a shouting match. 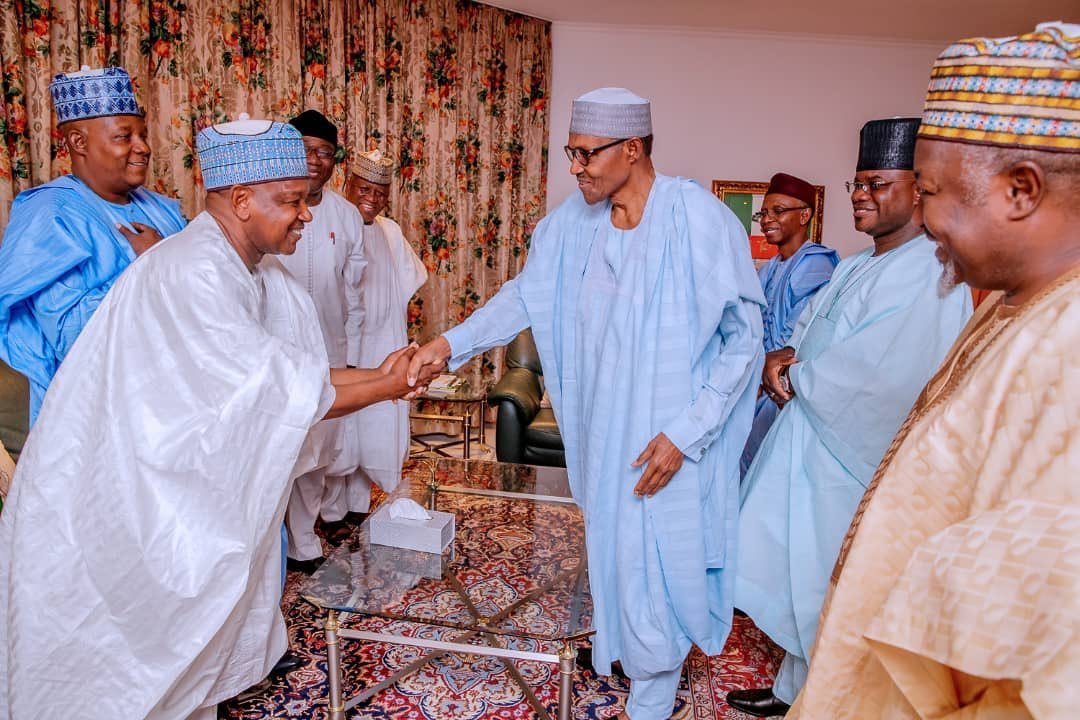 APC Governors and Buhari
Just before the Court of Appeal in Abuja on Monday nullified the suspension of Adams Oshiomhole as the National Chairman of the All Progressives Congress, it has been revealed that governors, who were opposed to Oshiomhole, at a meeting in Abuja, engaged in a shouting match with their colleagues supporting him.
This led to President Muhammadu Buhari postponing the APC National Executive Committee meeting indefinitely, according to a report by Punch.
However, a three-man panel of the Court of Appeal led by Justice Abubakar Yahaya unanimously ordered a stay of execution of the March 4, 2020 order of the High Court of the Federal Capital Territory in Jabi, Abuja, which suspended Oshiomhole from office, thus giving him a reprieve.
It also restrained the respondents to Oshiomhole’s appeal, including the police and the Department of State Services from continuing to enforce the FCT High Court’s order.
Apart from the police and the DSS, the other respondents restrained by the Court of Appeal were the plaintiffs at the FCT High Court who obtained the order for the suspension of Oshimhole.
They are the Vice-Chairman of the party in the North-East, Mustapha Salihu, and the Chairman of the party in Edo State, Anslem Ojezua; Alhaji Sani Gomna, Oshawo Steven, Fani Wabulari, and Princewill Ejogharado.
Oshiomhole, who was in court with a large number of his supporters, was visibly happy after the ruling was delivered on Monday.
The court lifted Oshiomhole’s suspension following an ex parte application for stay of execution of the FCT High Court’s order which was moved by his lawyer, Chief Wole Olanipekun (SAN), on Monday.
Delivering the lead ruling shortly after listening to Olanipekun, Justice Abubakar Yahaya noted that there was the urgent need for the FCT High Court’s order to be lifted to enable Oshiomhole to participate in the APC’s  National Executive Council meeting scheduled to take place on Tuesday.
Justice Yahaya said there would not be any status quo to maintain if the NEC meeting held in his absence.
He ruled, “We are of the view that an emergency picture has been painted so that the intervention by this court at this time and in this process is warranted.
“There is information that the National Executive Committee meeting of the second applicant is to be held tomorrow (Tuesday)  and following the order of the FCT High Court under consideration, the first applicant  (Oshiomhole) will not be able to participate. If this happens, then there is no chance that there will be status quo ante bellum to be maintained. The status quo can only be maintained, in these circumstances, if there is a stay of execution of the FCT High Court’s order.
“It is on this basis that we find merit in this application. We hereby order a stay of execution of the ruling of the FCT High Court in suit number FCT/HC/CV/837/2020 delivered on March 4, 2020, pending the determination of the motion on notice which is now slated for hearing on Friday, March 20, 2020.
“As a corollary, we also hereby make an order restraining the respondents, themselves their agents, privies, and servants, jointly and severally from continuing to take any further steps to give effect to the same order of the FCT High Court pending the determination of the motion on notice.”
Noting that Oshiomhole had demonstrated his preparedness to prosecute the appeal, the appellate court also ordered the accelerated hearing in the case.
Justice Yahaya ended the ruling with an appeal to politicians to stop involving the court in all their internal affairs.
“Having said all those, we implore political parties to try to resolve their differences amicably without the necessity of involving the court at all times,” Justice Yahaya said.
While arguing his ex parte application for the stay of execution of the FCT High Court’s order, Olanipekun had urged the court to grant the application, arguing that failure to do so might cause irreparable damage to his client.
“My lords, time is of essence,” Olanipekun said, adding that the National Executive Council of the APC was set to hold its meeting on Tuesday in Oshiomhole’s absence.
He also cited section 122 of the Evidence Act which he said “enjoins your lordship to take judicial notice of what is going on in your surroundings” as he said that the party had been destabilised since March 4 when the suspension order was issued against Oshiomhole.
He noted that the FCT High Court’s order suspending Oshiomhole was issued contrary to the admonition of the Supreme Court to courts not to dabble in the internal affairs of political parties.
An attempt by the respondents’ lawyer, Mr  Oluwole Afolabi, to pass the information that the party’s NEC had been postponed, was rebuffed by the panel.
Responding to Oluwole, the panel said the hearing being ex parte proceedings, the respondents were not entitled to be heard and the information passed to the court through their lawyer could not be validly used.
The Court of Appeal’s hearing was initially adjourned indefinitely on Monday afternoon.
The court resumed sitting at 4pm after the members of the special panel constituted by the court management were able to arrive in Abuja from their divisions in different parts of the country.
Justice Danlami Senchi of the FCT High Court had on March 4 suspended Oshiomhole as APC’s National Chairman on the grounds that the party wrongfully continued to retain him in office while he was under suspension as a member of the party.
The suit was instituted before the FCT High Court by six applicants.
Together with the Inspector-General of Police, Adamu Mohammed and the Department of State Services, the six applicants are the respondents to appeal jointly filed by Oshiomhole and the APC.
Top Stories