Tell-All: My 24 Hours With 'Yahoo Boys' And The Shocking Revelations (Part 2)


Enengedi takes on the bad image the wave of internet scam is giving Nigeria in the international community. 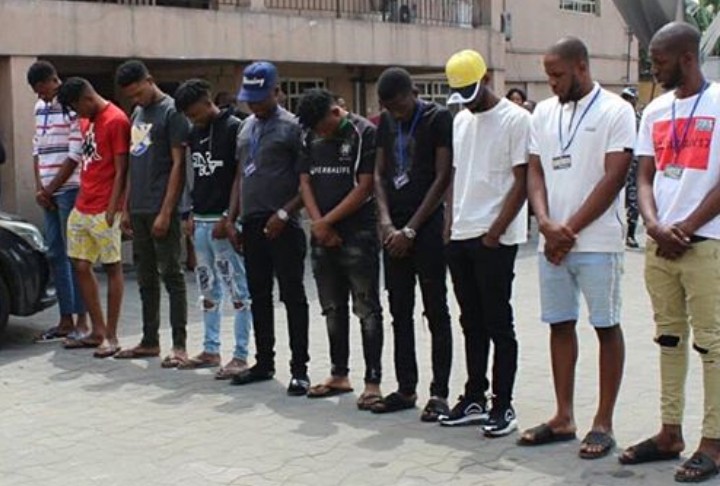 Cybercrime has been a major problem in Nigeria and to Nigeria as a country, giving it a bad image in the international community. For some, yahoo boys are a menace to the society, but for some, including popular musician, Naira Marley, internet fraud is only payback for what African ancestors suffered during the transatlantic slave trade centuries ago.

The ‘Soapy’ singer errs in his argument because the white Europeans are not the only victims of internet frauds. People of other races including our African brothers have also fallen victims to these scammers. An earlier investigative report revealed that Nigerian bank customers lost over N200billion to fraud between 2007 and 2017.

Given the high rate of unemployment and economic hardship, healthy and agile young men seem to have deployed their energy to negative activities. “I’m not Nigeria’s problem, the politicians are,” Simon reiterated Naira Marley’s popular argument. “Politicians steal more than you can ever imagine and do nothing for the people”

As a very religious people, we are taught not to ignore the laws of Karma and to always be aware that God is watching and will punish the doers of evil in this lifetime and the afterlife. When I tried to highlight my belief in Karma, the idea was considered laughable, even though they all agreed to the existence of God.

“I’m not the worst sinner bro. Some people are armed robbers, murderers, ritualists, so I’m not sure this my small sin is what God is going to punish me on earth for. If and when we get to heaven, we will all answer for ourselves,” said James.

“I believe God approves of my hustle. If not, ‘Maga’ will not pay,” Thomas insists. “Will it surprise you to know that I pray before opening my computer? There are so many people in this game but only a few are making it. It has to be God”

That’s when Phillip who has been quiet the whole time stood up and said, “Let me tell you a little story. Two years ago, I was having difficulties receiving money and so my dad who thinks I’m a businessman advised I go to a popular praying church here in Lagos to do deliverance. I was there fasting and praying for five days. On the fourth day, I got a call that one of my jobs had pulled through. I went there with less than N50k in my bank account, but left there worth several million.”

I’m sure they could see the disapproval in my facial expression, but I choose not to argue further. Then I asked, “What do you guys think of 'Yahoo Plus'”, referring to the rumours of some internet fraudsters going to juju-men and spiritualists to conduct one form of ritual or the other with fetish items, to become more successful in their schemes.

Laughing off my question Peter said, “Bro, I’m not sure about that. I think these guys are doing money rituals, using human sacrifices to make money and then claiming it’s ‘Yahoo Yahoo’".

“It actually looks better to say you are a yahoo boy than to admit you are a ritualist,” Matthias added.

“There’s juju in yahoo now o,” Simon says as he disagrees and tries to remind the others of a former associate named Jude who he insists frequently visits a certain “Baba” in Ogun State. Simon claims the fetish ritual is responsible for Jude’s consistent good luck, resulting in his outrageous wealth.
Yahoo boys often work and sometimes live together. From what I gathered, it is so because of the need to harness different talents to achieve a successful scheme. When in need to sweet-talk the victim, a smooth talker is needed. When in need to forge documents, an expert is needed. A tech wizard or hacker is needed as well as a bank account frontperson to provide a foreign bank account for which money will be paid. At the end of the day, everyone gets something that looks like a fair share of the proceeds.

The time seemed far spent and looking at my watch, it was already a few minutes past 7 pm. It was suggested we go somewhere more comfortable to finish our talk. Still enjoying our chat and with no other plan for the night, I had no choice but to agree. I rode with Matthew in his black Honda Crosstour. The convoy that followed included a White Lexus, Black Toyota Highlander, Two Toyota Camry and another car I can’t tell what brand it was.

“You know we all don’t live in that house,” Matthew said as if trying to guess what was on my mind. “The house is more like an office for us. We come in, work, and then go home to finish up.

“To succeed in this game, you have to be smart, discreet, keep a low profile and not give your neighbours any room for suspicion. Suspicion arises when your neighbours see you drive a big car when you are mostly at home.”

Our 20 minutes drive landed us at a popular lounge in FESTAC. The guys alight from their cars and make their way into the lounge. We pick a table and then order drinks from the waiters. I’m not big on drinking, so I settled for a malt, but the guys ordered expensive champagnes and wines, indicating that it was about to be a wild night.

It was obvious the guys needed to maintain a lifestyle of affluence and to also live up to the reputation amongst their colleagues from other camps. Keeping up appearances can have a toll on spending lifestyle and it got me asking what happens when the money stops coming in.

“Of course I have thought of all that. I have some properties in a few places in Lagos. If you are smart, you will plan ahead because this money is not forever sure. Tomorrow one technology could just block every of our access,” Peter said.

The guys begin to tell me about investments they have made and the properties they own in Lagos and in their respective home towns. Simon claims he has a pure water business with staff strength of about 11 people. Thomas claims he owns five cars which have been put on Uber service. Thomas said he owns a 3-star hotel back in his home state, then, Phillip is in the car sales business.

One thing was sure, these guys are preparing for the rainy day.

With the frequent raids on cybercriminals by the EFCC and Police, Matthew and his crew seem unperturbed.

“I don’t carry anything incriminating around. I have a legit business which I can show off as my source of income," Matthew insists.

"For me, I try to make friends with Policemen, both junior and senior officers. I settle on a regular, so I’m not afraid of them. They know what I do, and so long as they get their fair share, they are good with me," James said.