To reduce the spread of coronavirus in Germany, the govt has banned all gatherings of more than two people. 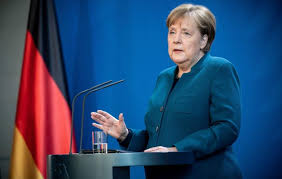 The German government has barred public gatherings of more than two people, except for families, to help prevent the spread of the coronavirus outbreak.

Speaking after meeting the leaders of Germany’s regions on Sunday afternoon, Chancellor Angela Merkel made it clear that the new restrictions are not desirable but necessary. “None of us wished that we would ever have to face the people with such rules,” she said.

Merkel who also revealed that she was going into isolation because her doctor had tested positive for the coronavirus warned of consequences if people violate the new measures, but did not specify what that would entail. “These are not recommendations, but rules,” she said.

The new regulation says: “Spending time in public space is only permitted on your own, with another person who does not live in the household or with members of your own household.” When in public, people should stand at least 1.5 meters apart, Merkel said.

The rule will be in place for at least two weeks.

In Germany, the number of confirmed cases had risen to more than 23,900 by Sunday, with more than 90 deaths.