A truly horrified mother has talked of her young daughter's fight against the deadly coronavirus. 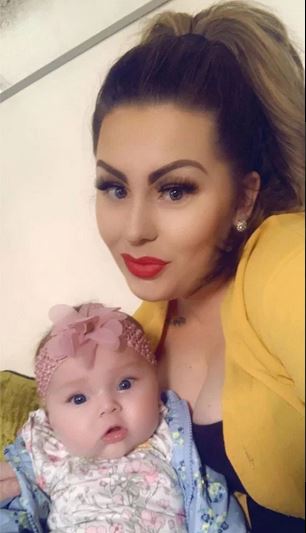 The mother and child

A single mum has spoken of her "heartbreak" after her 12-week-old baby contracted coronavirus - in what is thought to be one of the UK's youngest cases.

Winter-Rose Watson was rushed to hospital on Friday after worried mum Jade Watson called an ambulance when she was struggling to breathe and developed a temperature of 39.1C.

The baby was rushed to the Royal Blackburn Hospital, in Lancashire, and tested positive for the deadly virus.

Jade, 27, from Burnley, said: "It was the worst experience of my entire life, I was so scared.

"To see my baby struggling like that was so painful, I couldn't believe what was happening. I'm so grateful she was able to pull through."

The single mum, who also has a six-year-old son, said: "On Thursday she had a really bad temperature, it was about 38.5 degrees.

"So I contacted 111 and they advised me to stay at home.

"But at about 5am on Friday I'd set my alarm to check on her and she'd got really warm, even more than she was before.

"I didn't even need to touch her, there was heat just coming off her. She was gasping for breath.

"I called for an ambulance but it took around three hours to get here. Her temperature had gone down slightly but it was still 39.1."

Jade said it was "heartbreaking" to see her daughter in so much pain in hospital and it was made worse as she was not allowed to be with her because of Covid-19.

The 27-year-old said: "On Saturday morning the doctor came and told me she had tested positive for coronavirus.

"It was the worst thing in the world to hear.

"She was on a drip to try to get her fluids back up but there was nothing else they could do to help her fight it."

But after being cared for by NHS staff, Winter returned to her home on Monday having been the all clear by doctors.

Jade said: "She's still got the virus and I don't know if I've had it or not, as the only symptom I had was a headache that wouldn't go away, even after taking headache pills.

"My son was with me a couple of days before Winter went into hospital, but now he has to isolate with his dad at his home as we don't know if he could have it too.

"It's been such a difficult time as I've not been able to have anyone come and visit. Even when I was in the hospital I was on my own, it was hard.
She added: "There's been talk of this virus not affecting babies the same way as others, but it does, and it has affected Winter so much. I had never seen her looking so helpless.

"I'd only been out of the house really to go to Lidl and Home Bargains but people need to listen to the advice, and stay indoors."