Funke and her husband were tried and convicted in court for holding a party at their residence with over 20 persons in attendance. 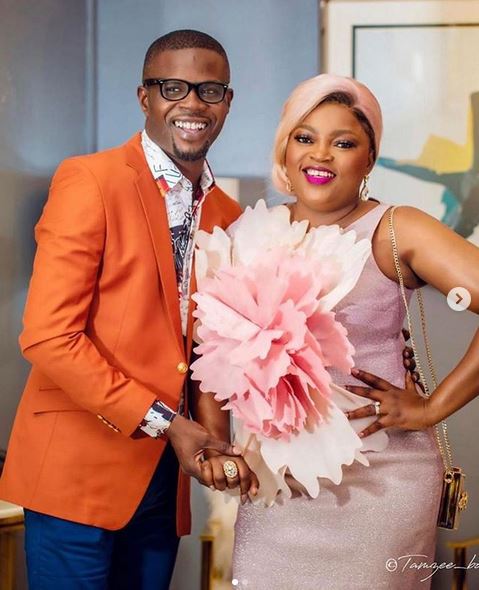 Funke Akindele and her husband

Some legal practitioners have said that in the eyes of the law, popular Nollywood actress, Funke Akindele and her husband are now ex-convicts.

The News Agency of Nigeria (NAN), reports that Akindele and her husband, popularly called JJC Skillz, on April 4, held a party at their residence with over 20 persons in attendance.

The duo later appeared in court charged with contravening Regulation 8(1)(a) and (b) and 17(1)(i) of the Lagos State Infectious Disease (Emergency Prevention) Regulations 2020, and therefore committed an offence under Section 58 of the Public Health Law Cap P16 Vol. 9, Laws of Lagos State 2015.

The law deals with the social distancing policy targeted at minimising large gatherings in the effort to contain the dreaded Coronavirus pandemic.

They two were thus sentenced to 14 days community service, besides other penalties, by Chief Magistrate Court 1 Ogba, Lagos.

Speaking to the News Agency of Nigeria(NAN), Mr Ahmed Raji, SAN, said: “Akindele and her husband, AbdulRasheed Bello, can be referred to as ex-convicts having pleaded guilty and were sentenced for violating restrictions order in Lagos.

“Technically speaking, anybody who has gone through a trial and is convicted can be referred to as an ex-convict.”

He restated that if the law under which the duo were convicted was a recognised one, then they were ex-convicts “because they admitted and the court gave them a light sentence.

“This is a form of punishment.”

Raji, however, said that the development would not debar Akindele and Bello from holding political offices in the country since the offence did not involve financial misappropriation.

Also speaking, Mr Ebun-Olu Adegboruwa,SAN, said:”there is no doubt that they are ex-convicts.

“This is because before the judge passed the sentence, they would have pleaded guilty, and trial would have taken place before judgment.

“So, as far as the law is concerned presently, they are ex convicts; but, I believe they took that process for convenience of their freedom,” he said

Adegboruwa, however said based on the provisions of the law and the case of Awuko vs Fagbemi, the judgment cannot stand and the case will be set aside on Appeal.

“This is because, there is no known law under which they were charged and no document showing that they violated any law.

“The directive of a Governor not backed by approval by the House of Assembly, is not law; such directive cannot lead to conviction and sentencing of any individual.

“So, I am advising her and her lawyers to take up the proceedings and file an appeal for it to be set aside.

“Section 36 of the Constitution provides that no one can be convicted except there is a law which specicifes the terms of such conviction ,” he said

In the same vein, an Abuja-based lawyer, Mr Tunji Oba, said that the sentence passed on Akindele and her husband stand until the pronouncement is set aside by an appellate court.

Oba said once a competent court gives a pronouncement, it stands until such is set aside by an appellate court.

“Because of that guilty plea, they were convicted .

“A competent court convicted them after they pleaded guilty. It does not matter whether the offence was a misdemeanor so long as there was a conviction.

“The charge was filed against them following the Lagos State Infectious Diseases (Emergency Prevention) Regulations 2020 made by the Governor .

“I am sure the Regulations were aimed at preventing further spread of the virus (covid-19) within the state . This regulation was made pursuant to the Lagos State Public Health Law, and Section 8 of the Quarantine Act, Cap Q2 LFN 2004,” he said.

Oba added that some lawyers have argued that a regulation does not qualify as a law under sections 36 (12) and 318 of the 1999 Constitution of the Federal Republic of Nigeria as amended.

“Section 36 (12) of the 1999 Constitution is that for a person to be arrested, detained or prosecuted for a criminal offence: There must be a written law, (ii) The offence must be defined in the written law and; A penalty therefore must be prescribed and they must all Co-exist.

“Section 318 provides that for an Act to be a valid law it must be enacted by the National Assembly” he said.

He stated further that though, the Constitution guarantees your rights to free movement, freedom of religion and association, however these rights are not absolute.

The regulation made by the Governor of Lagos State was a subsidiary legislation which derived its authority from existing Act / law of Public Health and Quarantine law.

“The essence of the regulation was to ensure that exigencies like the convid-19 are effectively controlled in the interest of public health and public safety.

“It follows that the regulation under which the Nollywood actress and her husband were convicted is a valid law properly so called ” he said.

“In that case, we should take COVID-19 as one of such situations which necessitated the containment of our constitutionally guaranteed right, in the interest of public safety and health ” he said.

When asked about his views on the status of the couple, Mr Femi Falana,SAN, said:” your request unfortunately, cannot be met because I am involved in the matter.

“She (Funke Akindele) has already briefed me and once the lockdown is over, we are likely to go to court;

“So, I don’t want to be seen as pre-empting what we are going to do,” he said