A driver has lost his life after he was shot dead by an NSCDC official for refusing to offer a bribe. 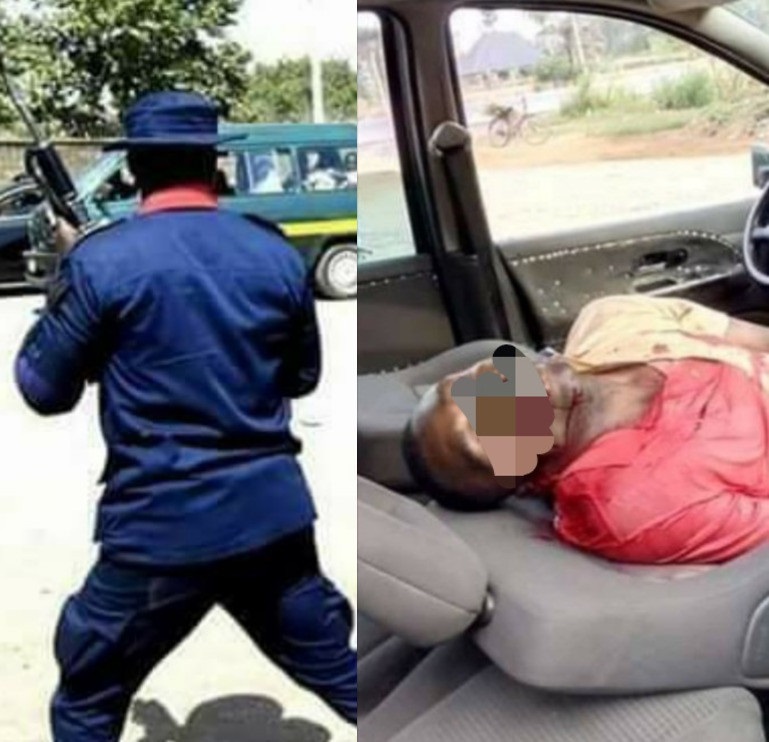 A commercial vehicle driver, Amobi Igwe, was on Wednesday killed by a trigger-happy officer of the Nigeria Security and Civil Defence Corps, Eke Richard.

The incident happened at the tollgate area of the Umuahia-Aba Expressway in Umuikea, Isialangwa South Local Government Area of Abia State around 7.10am, while the victim was conveying food items, like rice and tomatoes, to Aba.

The NSCDC officer was alleged to have demanded a bribe from the driver, who reportedly refused to part with any money.

Richard was alleged to have aimed his rifle at the driver and threatened to shoot him if he refused to hand over the key of the vehicle to him.

Sources said the middle-aged driver demanded to know his offence, but the NSCDC officer allegedly shot him at a close range and ran into the police station near the Umuikaa junction to escape mob attack.

The state Commandant of the NSCDC, A. C. Nwannukwu, confirmed the incident in a statement, stating that the driver from Ishiagu in Ebonyi State, was not conveying foodstuffs and allegedly refused to stop when asked to do so.

According to him, Amobi sped off dangerously, skidded over the barricade and brushed the officer with the car.

Nwannukwu added that at that point, Richard fired at the vehicle’s tyres, but “unfortunately, the bullet strayed and hit the driver, leaving him seriously wounded. He was subsequently rushed to a nearby hospital, where he was confirmed dead.”

Meanwhile, the Coalition of South-East Youth Leaders has demanded the immediate arrest, dismissal and prosecution of Richard, describing his action as “barbaric and wicked.”

“We condemn in the strongest term the killing of the driver by the NSCDC operative. We demand the immediate dismissal, arrest and prosecution of the NSCDC personnel and the team that caused the untimely death of this young man, who had a family and children to take care of,” the group said in a statement by its President-General and Secretary-General, Goodluck Ibem and Kanice Igwe, respectively.

Similarly, the police in Anambra State allegedly killed two persons, while enforcing the lockdown order in the state on Tuesday.

The incident happened at the New Tire Market Area of Nkpor in the Idemili North Local Government Area of the state.

An eyewitness told PUNCH Metro that one of the victims died on the spot, while the other passed away while being rushed to an undisclosed hospital.

The incident triggered a protest by residents, who blocked the New Tire Market of the Onitsha-Enugu Expressway and made bonfires.

Vehicular and human movement to and from Onitsha from the Nkpor area were affected for several hours.

A resident told one of our correspondents that trouble started when the policemen on patrol ordered some youths at a pub to disperse.

The resident said, “The youth told the policemen that the place was their residence and questioned why they should be ordered into their rooms.

“They asked the police if the restriction on movement involved people not coming out in front of their houses to relax.

“The question angered the policemen and they started threatening to shoot; the situation became tensed and attracted a crowd.

“The youth insisted that since they were in front of their residences, the police could not force them into their rooms, particularly when there was no power supply.

“At that point, the policemen opened fire on them and rushed into their patrol van and zoomed off when they saw the lifeless bodies of their victims on the ground.”

When contacted, the Police Public Relations Officer in the state, Haruna Mohammed, confirmed the incident.

He described the development as an unprovoked attack on the police patrol team.

Mohammed stated, “It was an unprovoked attack on the police patrol team with substances suspected to be acid by some miscreants in the area.

“They snatched the rifle of a policeman after pouring acid on him, which prompted the other policemen to use force to retrieve the rifle.”

Haruna said efforts were ongoing to restore peace in the area.