The man attempted to have his way and when Ibukun reportedly resisted, Ajayi was said to have become annoyed and brutalized her. 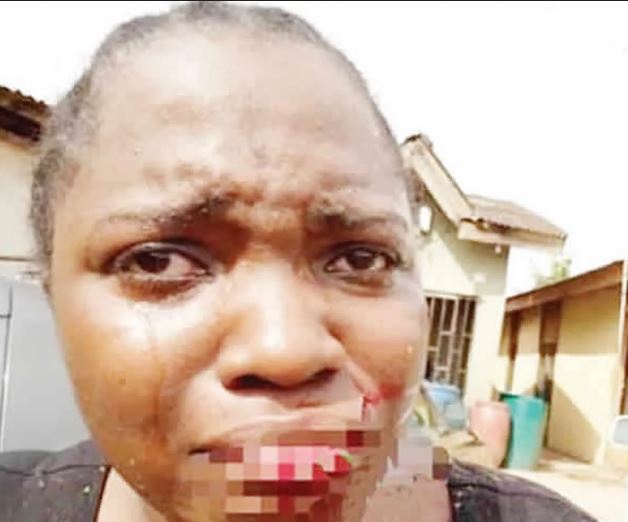 Men of the Lagos State Police Command have arrested a man, Muyideen Ajayi, for allegedly brutalising a lady, Ibukun Emmanuel, for refusing his sexual advances in the Agbado-Ijaiye area of the state.

PUNCH Metro reports that Ajayi had been pestering the mother of one for an intimate relationship, which she allegedly turned down.

However, Ajayi, who lives in the same compound with Ibukun, was alleged to have accosted her on Friday, April 10, 2020, in the Bajomo compound around the Ahmadiyya bus stop, Agbado-Ijaiye, in a bid to have his way.

He allegedly attempted to have his way and when Ibukun reportedly resisted, Ajayi was said to have become annoyed and brutalised her.

A picture of the assault, which had been trending on the social media, showed blood gushing out of Ibukun’s lips, which had a deep cut, and blood also splashed on her chest.

He wrote, “I want nothing but two things: The exact thing he used on her mouth should be used on his too with immediate effect. He gotta spend some quality time in jail with his mosquito and bugs paddies. What a waste…”

“Omg. probably the reason why she turned him down. She knew his character. How do you expect this woman to accept someone like you,” she wrote using her handle, @sashadonorhair_.

When contacted, the state Police Public Relations Officer, Bala Elkana, said the suspect had been arrested, adding that the command had launched an investigation into the incident.