A senator belonging to the ruling All Progressives Congress has accused FG of disbursing money using fake names. 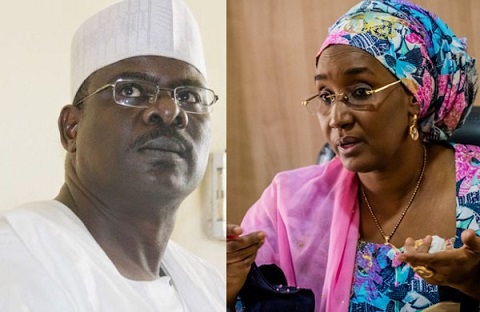 Ali Ndume and Sadiya Umar Farooq
Senator Ali Ndume of the All Progressives Congress (APC) has accused Minister of Humanitarian Affairs and Disaster Management,  Sadiya Umar Farouq of fraud. He accused the committee of generating fake names for the disbursement.
Ndume also called for the immediate disbandment of the Humanitarian committee in charge of disbursing palliatives to less-privileged Nigerians. According to him, the names of the beneficiaries of COVID-19 palliatives were fake.
He further accused the minister of lacking the competence required to head the Humanitarian committee. He advised President Buhari to set up a task force that will manage the disbursement of the palliatives meant to cushion the negative effects of teh COVID-19 lockdown.
The Senator said: “I’m not trying to make allegations against the Minister of Humanitarian Affairs, Disaster Management, and Social Development; what I’m saying are facts.

“If they will continue with the way they are doing now, they had better not distribute the palliative at all because it’s a fraud.
“My concern now is the manner and ways the palliative measures taken by the president are being executed. We have received numerous complaints and it’s very unfortunate. Left to me, I’m calling for the so-called Humanitarian committee headed by the Minister of Humanitarian Affairs to be disbanded immediately and the president should set up a task force to handle issues of palliatives.”
The lawmaker further said;
“The task force under the Chairmanship of each state governor should include a Senator and House of Assembly member from each state, the Army, Police, Civil Defense, religious organization, Red Cross, Civil Society Organisations to ensure the distribution of the palliatives; I don’t mind the Minister of Humanitarian Affairs and members of Social Investment Programmes as members.

“Imagine Zamfara state, which happens to be the Minister of Humanitarian Affairs’ home state, has 291, 629 households and 1, 341,153 individuals captured under the National Social Register of Poor and Vulnerable households for March 2020, leaving Sokoto State which is adjudged as the poorest state in Nigeria with a paltry 3,347 households and 18, 435 individuals. Borno has only 7,130 households and 33,728 individuals.

“I have reliable information that even names they have generated is fake, the BVN is not fraud-proof, one person will generate thousands of names and after conniving with banks, they are issued BVN. Investigation will reveal all these.
“They have the names of their cooks, drivers, relatives, relatives of their house helps and those they call the poorest of the poor and give this money to them.
“I call on the press to join in the call to stop this callous act, you can imagine the situation our people are in at the moment, yet some people are rushing to either share or steal this money.”
Top Stories