The death of the late Chief of Staff to President Muhammadu Buhari, Mallam Abba Kyari has unearthed many controversies about the politician. 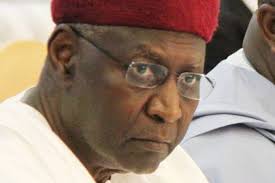 Late Abba Kyari
Even after the Chief of Staff to President Muhammadu Buhari, Mallam Abba Kyari, was buried on Saturday morning after battling COVID-19, controversies have continued to trail the man who was one of the most misunderstood person close to the President.
He was laid to rest at Gudu Cemetery in Abuja but there are few issues stirring controversies after the demise of the top aide in Buhari’s cabinet.
Here are they as compiled by TheNation:
1. Kemi Olunloyo’s ‘prediction’: From the moment Special Adviser to the President, Femi Adesina broke Kyari’s death, Kemi Olunloyo, a social media commentator and daughter of former Oyo governor, gained prominence for her recent tweet that ‘an high ranking member of the President’s cabinet had died of coronavirus complications” some days ago.
Although she failed to put a face to the personality in her ‘prediction’, she authoritatively claimed the official died long before Friday. As at then, only Kyari was known to be a public servant under treatment due to COVID-19.
2. Kyari’s age: Shortly after his death, Wikipedia updated his status but clearly stated that his age has not been made public while he was assumed him to be in his 70s. While the age is still being debated, Television Continental, TVC continues to maintain in its live coverage of the burial rite that the public servant lived between 1938 and 2020, which is a total 81.
3. Actual location of death: Unlike other some other prominent COVID-19-related deaths in Nigeria, where Kyari underwent treatment remained shrouded in secrecy.
It was also not stated in the Presidency’s statement while announcing his demise. The last detail open to the public regarding was his personally-signed statement on March 29 where he clearly asserted that he would be traveling to an undisclosed hospital in Lagos for private treatment, hoping he would return to work soon.
4. Violation of social distancing during burial rite: Senior Special Assistant to the President on Media and Publicity, Garba Shehu stated on Saturday the deceased’s burial will be private in Abuja ‘in strict observation of the protocol put in place burial of Coronavirus victims by the Nigeria Centre for Disease Control, NCDC and Ministry of Health.’
In compliance with the World Health Organization, the NCDC also gave a social distancing guideline of at least two meters (3 feet) between two people. Generally, social gathering is strictly warned against to avoid this violation.
On April 3, Minister of Information and Culture, Lai Mohammed also established deceased patients of COVID-19 remain infectious.
But, monitoring the live coverage of the rite at the Gudu Cemetery today on TVC, neither social distancing was observed as the population was well over 20.
The gathering could also be hardly said to be private.
Top Stories