The company has decided that at least 90 per cent of its workers will proceed on indefinite leave without pay from May 1. 2020. 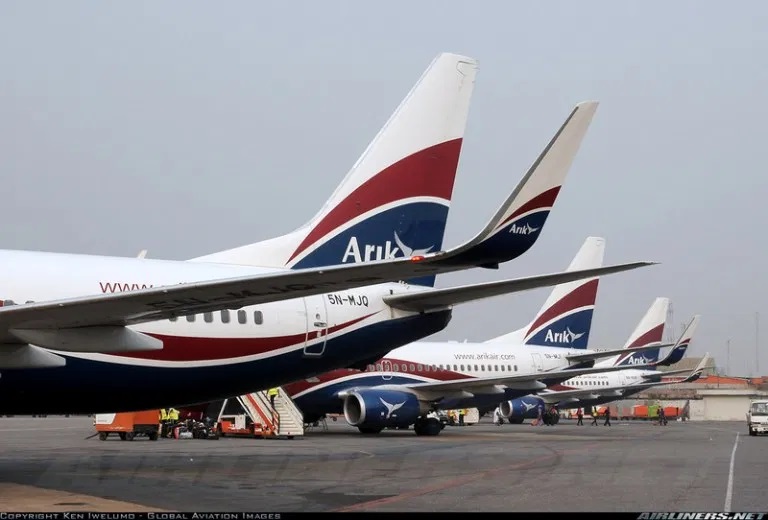 As the airline industry across the world continues to take a beating following the suspension of most local and international flights, Nigeria’s largest commercial airline, Arik Air, on Thursday informed staff it would cut the salaries of its employees by a whopping 80 per cent, PREMIUM TIMES reports.

In an internal memo obtained by PREMIUM TIMES the airline’s Chief Executive Officer, Roy Ilegbodu, informed employees that the management of the company has also decided that at least 90 per cent of its workers will proceed on indefinite leave without pay from May 1. 2020.

When reached for comment, spokesperson of airline, Ola Banji, succinctly confirmed the decision but declined to give further details.

In the memo seen by PREMIUM TIMES, Mr Ilegbodu lamented that the outbreak of the pandemic has placed the company in an unimaginable financial strait that is unlikely to ease anytime soon.

He said the company revenue stream has plunged by 98 per cent and the financial downturn has been made worse by the drop in the value of the naira and the dip in the price of oil.

“To date, the situation created by the COVID-19 pandemic remains dire with a high level of uncertainty, even within medical circles regarding the containment of the pandemic. Although daily updates from a few countries seem to be encouraging, our situation in Nigeria appears to be getting worse. With the current observed trend of events, it is prudent to lean on the assumption that the situation is likely to persist for a while longer.

“Of huge significance to us is that we have suffered a sharp decline of over 98% in our revenue streams since the suspension of our scheduled flights almost four weeks ago. Added to this is the rapid decline in the value of the Naira by over 35% against the benchmark and with oil prices now falling well below $15 per barrel, it is evident that we must, without further delay, take decisive action to preserve our organization,” he wrote.

As a result of these, the CEO said, the company has tried to save cost by renegotiating rates with its suppliers and contractors and has also “implemented contingency plans for staff and introduced operational support flexibility.”

He said though these measures have led to a reduction of expenditure, “the outlook for the near future is not encouraging and our current level of business simply cannot support our operations for much longer.”

“For this reason, to safeguard the survival of our organization, we are constrained to introduce additional measures to curtail our costs, as dictated by the turn of events.

“After careful deliberation and analyses, management has decided to implement an 80% pay cut for all members of staff across the entire organization for the month of April 2020. Furthermore, commencing from May 1st 2020, no less than 90% of our staff will proceed on leave without pay until further notice.”

He, however, explained the decision will be reviewed monthly and the company’s human resources department will keep workers informed about future decisions reached.

On Friday morning, employees of the airline subsequently received two memos from the company’s HR department. The first memo explained that during the compulsory leave, the company’s health insurance scheme (HMO) shall continue to run.

The second memo explained that while all staff have been placed on compulsory leave without pay, staff involved in the company’s charter operation were excluded from the restructuring.

The Asset Management Corporation of Nigeria (AMCON) took over Arik Air in February 2017 and the airline was subsequently placed in receivership, following its inability to repay debts in excess of N300 billion to AMCON and other creditors in Nigeria and around the world.

Mr Kuru said his agency saved the airline from the brinks of certain collapse and that the National Assembly should ensure that the government leverages on the potential of the airline towards setting up a national carrier rather than trying to set up a new airline brand from scratch.

The global airline industry is one of the sectors most hit by the outbreak of the pandemic with major airlines across the world laying off workers and demanding government stimulus to remain operational after the pandemic.