The woman who had tested positive for coronavirus, died after her condition deteriorated following the birth of her son. 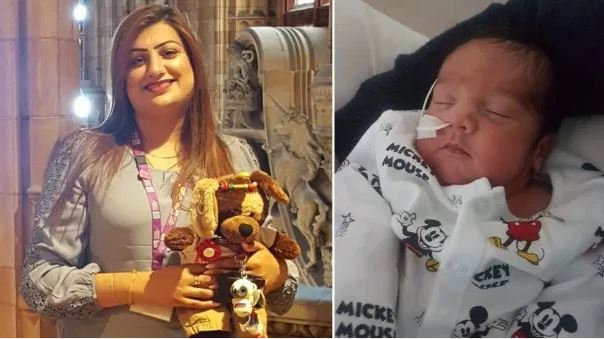 Fozia Hanif died on April 8 after testing positive for coronavirus

The family of a new mother who died in hospital six days after giving birth have spoken of their devastation.

Fozia Hanif, who had tested positive for coronavirus, died at Birmingham’s Heartlands Hospital on April 8 after her condition deteriorated following the birth of her son.

The 29-year-old – whose baby remains in hospital but has tested negative for Covid-19 – was one of five siblings and worked for probation services at Birmingham Magistrates’ Court.

Relatives said Ms Hanif had regular maternity check-ups in hospital during her pregnancy and at one she was found to have a slight fever, later testing positive for Covid-19. Her husband Wajid Ali told ITV News: ‘They said “We’re going to keep her here to find out and we’re going to do a Covid test” and they kept her for two days.

‘The test came back positive and the next day they said it was mild and you can go home. After four days she had difficulty breathing and we called the ambulance.’

Ms Hanif’s sister Sophia Hanif said: ‘When the ambulance came they did checks… and everything was alright in terms of her blood pressure and sugar levels, but they still had to take her in to hospital for her baby and… I think it was the second day she was in hospital she gave birth.’

For all the latest news and updates on Coronavirus, click here.

Her son, Ayaan Hanif Ali, was born at 31 weeks on April 2 by Caesarean section.

Ms Hanif was taken to a recovery ward after the birth, but her condition deteriorated and she was moved into intensive care and put on a ventilator.

Sophia Hanif told ITV News the family were anxious that Ms Hanif was not allowed visitors while in the recovery ward, but they were informed at one stage she was getting better.

Ms Hanif’s father Nabil Hanif said: ‘It gave us proper hope… we got excited. They took her to the recovery ward, they gave her the phone… we actually spoke to her.’

Because of her condition, Ms Hanif was not able to see her baby and only saw pictures of him before she passed away.

Ms Hanif’s husband was called days after her admission to ICU and told her condition had deteriorated, she had developed a blood clot and was in a coma.

Her husband and father were allowed to see her, wearing protective equipment, but her ventilator was turned off on April 8, leaving her family devastated.

Nabil Hanif said the family are still grieving, but added: ‘We’ve got each other, holding each other, supporting each other, siblings, grandkids… she was a little superstar with us in our family. She was an inspiration to us all.’