Unbelievable! Nigerian Man Murders His Only Daughter As Condition To Take Second Wife


In what will come across as a really shocking development, a man has killed his own daughter so as to take a second wife. 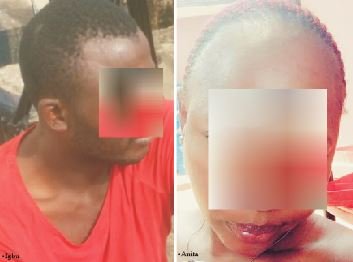 It is said that blood is thicker than water, but definitely  not so with David Igbu, who has confessed to terminating the life of his only daughter in fulfilment of a condition to taking a second wife.

No fiction could be stranger, but this is no fiction.

Igbu, an indigene of Awe Local Government Area of Nasarawa State, is a welder by profession. He got married to Mary Adi and both were blessed with a baby girl, Gloria. However, following the birth of Gloria  in 2013, Mary had difficulties in conceiving, until in 2018 when she finally took in. Unfortunately, she died during labour.

A year after his wife’s death, Igbu said he decided to enrol for a part-time diploma programme at the Nasarawa State Polytechnic, where he met Anita Abu, a lady from Obi  Local Government Area of the state. Both fell in love and in the process, she became pregnant.

That marked the beginning of trouble for little Gloria, as, according to Igbu, Anita insisted that the only condition on which she would marry him and deliver the pregnancy was if he eliminated six-year-old Gloria.

Rather than back off, blind love took the better of Igbu and he accepted to carry out Anita’s wish.

According to Igbu, Anita on February 12,  2020, at about 12 midnight, mounted heavy pressure on him to throw his daughter into an unused well. She accused the little girl of being behind the numerous bad dreams she was having.

Igbu obliged his would-be wife, picked up Gloria, who was deep in her sleep and dumped her in the well. Both convinced themselves she was a member of a secret cult and witchcraft.

The corpse of the little girl was discovered the next day by a neighbour, as he made to fetch water from the well. He raised the alarm, and the girl’s lifeless body was brought out with the help of neighbours.

Not satisfied with his explanation, members of the community vigilante group pick up David with his fiance, Anita.

During interrogation by members of the vigilante group, Igbu admitted in the presence of our correspondent that he took the decision, having been blindfolded by his fiancee’s antics of love.

He said he took the decision to fulfil the condition given to him by his pregnant fiancee, who said she would not raise a family amidst a cult and witchcraft member and threatened to abort her pregnancy and quit the relationship.

Looking sober, he said, “I have since regretted my action. My late wife will never forgive me in her grave. I have betrayed her trust and love; it was the work of the devil.

“From the first time I met and asked Anita out, she had been complaining over the existence my daughter and just develop hatred for her. She regularly framed up stories about her. I regret buying into her devilish ideas,” he said.

Speaking with our correspondent, Anita denied ever telling his fiance to kill his daughter as a condition to marrying and giving him a baby.

She said she only told him she could not live in the same apartment with her.

She said “I told him that if I must marry him, his daughter will have to leave the house, because she always appeared in my dream each time I pass the night in her father’s house.”

She said the late “Gloria may not be a human being, but killing her was not the best option.

But Igbu’s childhood and close friend, Isaac Ugba told The Nation  during further investigations that David Igbu is not the biological father of the late Gloria. He said the late Mary was two months pregnant when she married his friend.

“I know the details of what  happened but that is a long story and I don’t want to talk about it now because no sane human being will kill his daughter for whatever reason.

He said “Late Mary was a nice woman, Godly and hardworking, who loved her husband so much. In fact, they both loved each other but I don’t know what came over him. Even if you feel she is not your daughter, she is a human being and you don’t know what God has for her in life.”

Ugba further revealed that “Some other guys were going out with Mary when my friend approached her and join the league. When she got pregnant, there was a bit of confusion as regards who actually was responsible. But she insisted it was my friend and out of love, he accepted it and got married to her. Later, we were hearing stories that he was not the owner of the pregnancy. All I want to say is that my friend and his late wife were the best of friends and there is no reason for him to do what he has done simply because of a new woman,” he said.

Igbu however denied the insinuation by his friend that he is not the biological father of Gloria or that this may be why he gave in to the evil plan.

Igbu, who narrated to our correspondent how he lost his wife to maternal mortality, said it was a painful memory.

He said his wife, heavy with second pregnancy, was in labour at the hospital in February 2018 and finally gave birth to a baby boy. But the tears of joy quickly turned into panic when she did not stop bleeding, suffering from postpartum haemorrhage and eventually died at 1:23 the next morning.

He said the baby boy equally died one week after the death of her mother and was buried in the village.

He said it was hard for him to accept the death of his wife, being so sudden

and the fact that it seemed like an irreplaceable part of him was snatched away.

What David Igbu could however not explain was how he ended up committing such heinous crime against Mary’s daughter, if he so much loved her.