Intending couples have spoken out on how the raging COVID-19 disrupted their wedding plans. 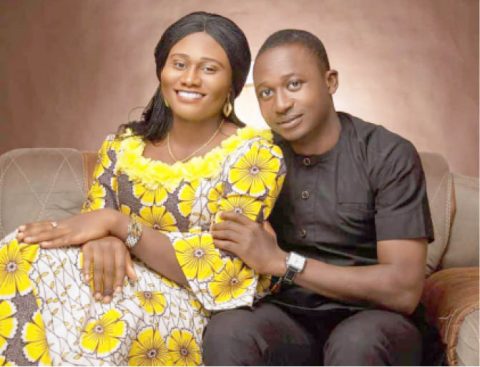 Patience Luka and her fiance whose wedding was postponed

Following the ban on religious and social gatherings which was followed by a total lockdown in many parts of the country in efforts to prevent the spread of COVID-19 pandemic, several marriage ceremonies have been postponed while others have held low key without the usual fanfares.

Many state governments had placed ban on weddings, burial rites and other social engagements that would attract large gathering.

Some of the intending couples whose long awaited hope of tying the nuptial knot had been dashed due to the situation shared their bitter experiences with Daily Trust Saturday.

Abubakar Musa popularly called Bomboi said his wedding which should have taken place on April 4, 2020 had to be postponed to May 30th due to the lockdown in Kaduna which was recently extended for another 30 days.

He said while he hopes the lockdown will not be extended for a second time after the 30 days, he is however prepared to settle for a low key wedding should the government extend the lockdown.

“We will then go ahead with the Fatiha with just a few people and then suspend any social gathering until anytime the lockdown finally comes to an end. I am lucky that on the week I was supposed to make payments for a hall and drinks for the wedding, the state government announced the lockdown so I have not paid for those things yet. However, I have printed both the wedding and event card and now the dates have all changed,” he said.
For Anna Andrew whose wedding was also postponed from April 11th said there is no new date for her wedding. She said even though she would have preferred a low key wedding based on the current situation, it has become practically impossible because her fiancée is equally on lockdown in Lagos.

“We started rearing chicken for the wedding since December and we have paid N170, 000 for the reception hall. We have printed our wedding cards and jotters for souvenir but all that have been a waste of money now. We have spent a lot of money from my side and also from his side. We have no alternative at the moment. We only hope the lockdown doesn’t exceed August,” she said. 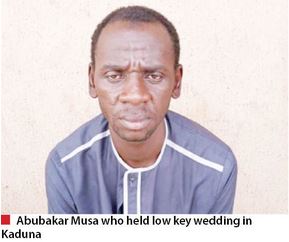 The bride to be told Daily Trust Saturday that she has been traumatized by all the calls and questions from various quarters on a new wedding arrangement adding that, “If only my fiancée was in Kaduna, we would have done a low key wedding with just a few people but the situation is different.”
Unlike Ann, Patience Luka said weddings are once in a life time and would prefer to have a big wedding with all her family members and friends in attendance. “It is a wedding not mourning; it is a celebration so I want everyone to partake in it. I also don’t plan for a low key wedding,” she said.

Patience whose send off party was scheduled for April 13 and Church wedding, April 18 said though the wedding has been suspended till further notice, she hopes that the lockdown will ease off in the next two months in which she and her fiancé will make new plans.

“We bought food stuff; we bought plastic drinks which we have now noticed will expire next month. We have paid N70, 000 for an event hall just as our wedding cards and souvenirs are ready. In fact, I just received some souvenirs bags with stickers of the original dates yesterday (Tuesday), so honestly, it hasn’t been easy,” she said.

However, Ibrahim Abubakar from Kabala Costain in Kaduna who had a low key wedding on March 26 with only eight people in attendance said his family and friends have now nicknamed them ‘corona couple.’

He said they had suspended other cultural rites peculiar to Hausa and Fulani customs due to the state government’s restrictions on social gatherings and said only the wedding Fatiha was held with less than 10 people.

In Ibadan, Oyo State, a would-be-couple, Dare and Kemi Oguntoyinbo told our correspondent that even though the families have expended close to a million naira on their wedding celebration slated for April 11, the event had to be postponed till when government lifts ban on social gathering.

The postponement of the wedding ceremony which was billed to be held at a popular church, Jobele Oyo town in the state, according to the groom, was “the most devastating moment” in his life.

“Though, I know God has a way of doing things but the moment the marriage was postponed, I had a bad feeling in my life. It could be for a good reason but I am not happy since we postponed our wedding because as a couple, we have targets. By now, we could have done certain things in moving forward,” he said.

When asked why he didn’t formalize the marriage between the two families and the officiating minister of God in the church and take his wife without large gathering, Dare said the plan he had with his fiancée  was never to have a low key wedding ceremony. 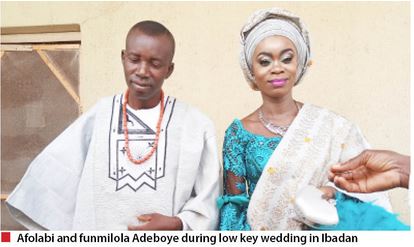 “How do you mean? It is better we postpone the marriage than to do a low key marriage. How do you think we could get our money back from the people we have contracted for various activities, especially the entertainer?

“For instance; the camera man has collected money for coverage; the musician has collected his money for entertainment and the caterer has also collected money for food. We have paid for cow already and the multi-propose hall where the reception would be held has been paid for. Besides, this is the first time my in-law will be handing daughter to a man in marriage. So, let’s wait till the time the government will lift ban on social gathering,” he said.

On her part, the bride, Kemi said they are couple already because they had done the registry “which is the most important aspect of marriage, but the social celebration is necessary to entertain family members and friends.

“We never knew the lockdown and banning of social gathering would last this long. Since we have done our registry, we are couple already but there is need for ceremony which we have postponed till government lifts ban on social gathering. I am sad about the development but we just have to celebrate it. We don’t know why this is happening now but I know it is to the glory of God. What if social gathering was not banned and God forbid, some people attended and had accident?” she queried.

However, another couple, Olufunmilola and Afolabi Adeboye said after the initial postponement of their wedding ceremony for a week, the family eventually formalized their marriage with eight family members in attendance.

The bride, Olufunmilola told our correspondent that her husband, she and the family members decided to take the decision because they have foreseen that the lockdown may take time than people envisaged.

“Today, I am one of the happiest persons in the world for having a successful wedding. We have decided to postpone all the celebration to a year anniversary of our wedding,” she said.

In Rivers, a wedding fixed for April 18 at Oyigbo by an intended couple, Miss Marvin and her fiancé was postponed as a result of the COVID-19 pandemic lockdown in the state.

A relation of the would-be-bride, Mrs. Blessings Azu told our correspondent that the wedding has been postponed indefinitely because of the ban on social activities in the state.

She said that invitation for the wedding had been sent out just as arrangements for hall , food , drinks and other logistics were paid for before  the wedding was put abruptly put off.

In Lagos, the families of Senge and Oladimeji postponed the wedding of their children, Ismail and Halima earlier scheduled for April 4 till further notice.

With the postponement, Ismail and Halima, the intending groom and bride respectively have expressed their disappointments.

Narrating how he feels, Ismail Senge said, “The postponement of my wedding was really devastating to me but I thank God for everything. Before the lockdown, we had already gone far with the wedding preparations as the event hall had been booked and invitation cards had been printed. Some of my family members had already come in from the United States and before we could pick them up from the Murtala Mohammed International Airport, they were all quarantined for 14 days.

“In spite of all, they couldn’t execute the main reason that brought them to Nigeria. The cow that we bought had been re-sold at a reduced price. We pray for normalcy soon, so as to avert re-selling most of the food items already bought,” he said.

On whether he is considering a low key ceremony, should the situation continue, Ismail said that for now, there is no such consideration but that the family may have a rethink if the situation lingers.

The bride, Halima Oladimeji said she was astonished by the announcement of the lockdown and ban on social gathering, knowing full well that it was going to affect her special day.

“After a deep thought, I realized that the lockdown is necessary because it is not about me but about all of us. I wouldn’t want anyone to contract the virus as a result of my wedding,” she said.