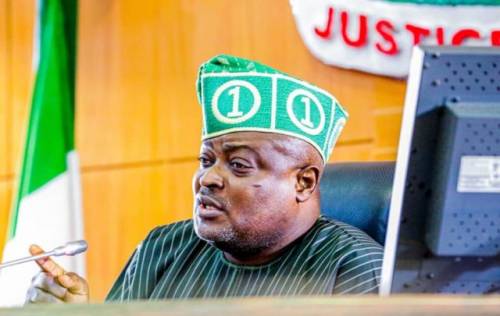 Lagos Speaker, Hon. Mudashiru Obasa
The Speaker, Lagos State House of Assembly, Hon. Mudashiru Obasa, has threatened to sue Publisher of Sahara Reporters, Omoyele Sowore over a report it carried accusing him of engaging in contract scam.
Obasa has now given Sowore seven days to retract the claim against him or risk a N1 billion libel suit.
The lawmaker made the demand in an April 30 letter through his lawyer, Lawal Pedro SAN.
Pedro said Sowore and his online medium defamed his client through a story titled, ‘Exposed: Speaker of Lagos Assembly, Obasa, awards contracts to self through a company registered in son’s name.’
According to Pedro’s letter titled, ‘Demand for retraction of defamatory statements published against and concerning the person of Rt. Hon, Mudashiru Ajayi Obasa and apology for the publication’, the “absurd, abusive and malicious” story claimed that the Speaker awarded contracts to himself through companies registered in the names of his children, wife and father.
He said the said publication has subjected his client to ridicule by falsely presenting him as a corrupt person.
Pedro’s letter stated that none of the companies mentioned in the publication had ever been engaged or awarded any contract by the lawmaker.
He said Sowore must retract the story and tender an apology within seven days or prepare to be slammed with a N1 billion libel suit.
Pedro noted that while his client had taken the pains to refute the claims online, the publication reared its ugly head somewhere else.
Top Stories