A Retired Deputy Commissioner of Police, Hamza Idris has been confirmed dead.

A former Assistant Commissioner of Police, Hamza Idris Malikawa has died in Kano State barely 24 hours after another assistant commissioner of police, Atiku Nagodi died in the state.

Rilwanu, the deceased's brother who is also the media officer of Kano Pillars FC said his brother who is diabetic died after being admitted at the hospital. He will be buried today according to Islamic rites.

Kano Pillars FC also confirmed the death of the former Assistant Commissioner of Police in its tweet. It read;

“Our thought and prayers are with the family of the Media Officer of our darling club, Rilwanu Idris Malikawa, who lost his brother, former Assistant Commissioner of Police, Hamza Idris Malikawa. He would be buried this morning in Kano. May his soul rest in peace!” 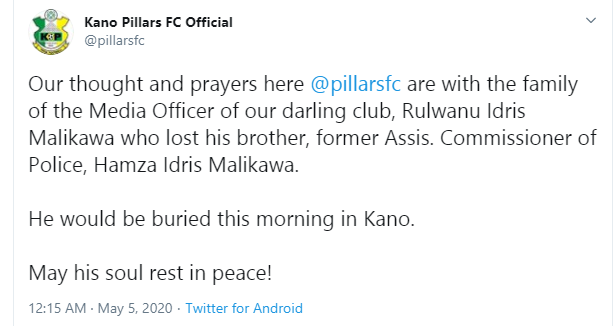