The cause of the death of the fishes is still shrouded in mystery, causing some mystery. 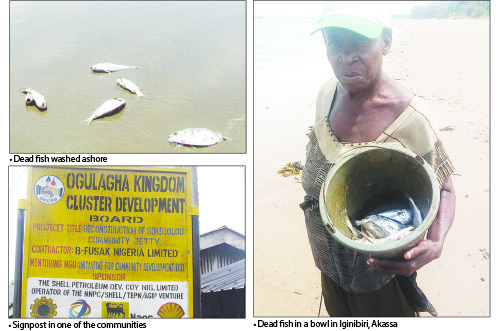 A mixture of horror and shock has enveloped some Ijaw coastal communities in Delta and Bayelsa states over the discovery of hundreds of dead fish washed ashore one early morning. The cause of the death of the fishes is still shrouded in mystery. This in a way has triggered anger, given the disadvantaged position residents of coastal communities have been boxed into over the years through the actions and inactions of oil multinational corporations, the three tiers of government and their agencies.

“We have been going to sea for fishing but we no longer catch fish. But each time you go to the shoreline, you see dead fishes washed ashore by the waves. Due to this, even if you go out to cast your nets, you won’t catch fish” said Mrs. Patricia Pondi, an opinion leader in Sokebolou community.

“And because we don’t know what is killing the fishes and bringing them to the shore; we are afraid and cannot eat them. We cannot eat the dead fishes. That is how we have remained till today,” she lamented. She named other communities affected to include Yokiri, Obotobo 1, Obotobo 2, Pipeline, Ugulagha, Youbebe, Obuoru, Okuntu, Agge and Agoro. According to her, the situation has plunged her and others in the fishing business into bankruptcy as their source of livelihood has been hindered.

An environmentalist, Frank Magada, who had visited the area in connection with issues of pollution, corroborated Pondi’s claims, noting that pollution from the operations of oil companies could not be ruled out as the cause of the mysterious death of the fish: “I was just briefly informed by the CDC chairmen of Sokebolou and Yokiri to come and ascertain the level of pollution that has been happening in their community. And I came on a field trip to the environment and I took samples. I saw dead fishes all around on that day. Then I proceeded to the laboratory for analysis.”

For 56-year-old  Felix  Igbomene who spoke to a group of environmentalists from Envioronmental Rights Action/Friends of the Earth (ERA/FoEN), led by Mr. Alagoa Morris and Akpotu Zoworintin, the strange thing killing the fishes has made their death unbearable for the people.

He said, “As fisherfolks, when we go to the sea to fish, we no longer catch fish due to what is killing them. We are gaining nothing from this strange incident and it is affecting us as fisherfolk. I used to go out fishing in the sea day and night, but for almost a month now I haven’t gone to sea because of this.’’

He disclosed that they have been warned not to eat the dead fishes as it could bring health problems adding, however, that the cause of the death of the fishes should be investigations because of the economic problems it has caused for the people: “The current situation has denied us so much; we don’t have to eat. They should know what to do. We are hungry and fishing has been our means of livelihood. We are not working in the company, we survive through fishing.’’

The women leader of the Sokebolou community, Mrs. Mary Tortor, called for urgent economic action to save the people from starvation.

She said, “Since the fishes started dying for two months now, we have been denied food. People go to the sea and return without catching fish. We are now staying at home, without anything, and only God is helping us in terms of our feeding. If not for the periwinkle we got from the creeks and not from the sea, which we are using to help ourselves, we would have been completely helpless.”

The national president, Ijaw Peoples Development Initiative (IPDI), Comrade Ozobo Austin, was of the view that it was oil companies that spilled chemical substances into the sea, which has caused the death of the fishes. He said a petition has been sent to relevant quarters for intervention: “A lot of fishes have died. People go to the shore and begin to pick dead fishes. Every day, people go to the shore and pick fishes. And the cause of it is unknown.  This has made us to visit this place. And we have made petitions. We have petitioned the National Assembly, the House Committee on Environment. We have also petitioned NOSDRA.”

He continued, “It is my plea that relevant authorities should not hesitate; they should rise up to the occasion and ensure that the needful is done. What are the needful? One, locals can no longer go about their normal fishing activity; their fishing has been joepardised and hunger is on the high side. Meeting parental responsibilities to children has become a challenge too. Even the environment is highly polluted; the water is polluted and this is threatening because what kills aquatic lives is likely to kill humans. People living in such environment are exposed to great risk, health-wise. That has been the issue. This incident happened almost two months now and we are still recovering fresh dead fishes on the shoreline. This is appalling’.’

The Ijaw Youth Council (IYC), represented by the transition implementation committee headed by Kenndy Olorogun, has lent its voice to those of the residents of coastal communities to bemoan the dead fishes on the shore and asked for investigations.

“You will see dead fishes floating on top of the river. Fishermen in the area can longer go to fish and you know the times we are in; in this season of coronavirus, you can better imagine what the people in these areas are going through. The entire body of water surrounding these communities is saturated with oil spills. Everything in the water is dead.  What these communities are facing is also applicable to other riverine communities of Delta, Edo and Bayelsa. If nothing is done urgently, it may lead to uprising” the IYC said in a statement signed by Olorogun Frank Akiefa and James Tobin.

They called on relevant agencies to investigate the mystery, stressing that oil-bearing communities have suffered enough for hosting oil companies: “Oil-bearing communities in the Niger Delta are suffering severely under the yoke of mindless and barbaric exploitation of the resources in the region. Before the Federal Government declared lockdown in some states including the FCT, communities in the Niger Delta were already in economic and environmental lockdown.

The people living in these communities no longer see themselves as citizens of Nigeria. Something needs to be done urgently. The extent of environmental pollution in the area is alarming. The death rate from oil and gas explorative activities of these multinationals exceeds what the world now knows as the novel coronavirus”

Chief Simeon Josiah Israel, Avumgba of Opu-Okumbiri, Brass Local Government Area of Bayelsa State. also lamented on behalf of the people of coastal communities the dead fishes and blamed oil pollution as the cause.

He bemoaned the “plight of Bayelsa and Delta state coastal dwellers caused by petroleum pollution as a result of petroleum exploration companies operating onshore/offshore.”

“Our fishermen have been experiencing toxic pollution along the coastline, especially in the Brass and Southern Ijaw LGAs. We call on Federal Ministry of Petroleum Resources/Environment, other relevant government agencies to urgently prevail on the crude oil and gas firms operating in the affected areas to collaborate with the petroleum industry regulators to trace the source of the pollution,” he said.

The plea for investigation by Chief Israel was re-echoed by ERA/FoEN, which also called for for a probe, pointing out that “the sea should be remediated by whoever is found culpable.” It also called for “the detoxification of the sea/Atlantic Ocean from source of toxic release.”

NOSDRA, in its first official statement since it swung into action probing the death of the fishes, said it found no oil leaks linked to the massive death of fishes that still float and litter the Atlantic coastline across the Niger Delta.

The agency said it was coordinating a multi-agency investigation aimed at unravelling the cause of the reported massive death of fishes within the nation’s territorial waters and was looking beyond the oil industry.

Mr. Idris Musa, director-general of NOSDRA, in a statement, said the agency deployed officials from its office in Warri, Yenagoa and Port Harcourt on site visits to the Atlantic coastline in Delta, Bayelsa and Rivers to collect water and fish samples for tests.

“The National Oil Spills Detection and Response Agency carried out a reconnaissance of the area in Delta, where we first got the report through a member of a non-governmental organisation. There was no incident of oil spill within the area of reported dead fishes, notwithstanding that a few dead fishes were seen along the shoreline. The event of recent days, where the death of fishes in large numbers make it expedient to look beyond oil spillage as the likely  cause death of fishes in such large numbers. The agency proceeded to collect samples of water, sediments and some of the dead fish for laboratory testing. In doing so, the agency brought onboard other relevant agencies of government that have mandate on our territorial waters” the statement read in part.

Dr. Bashir Jamoh, director-general of NIMASA, in tandem with Musa, acknowledged that a scientific investigation of the dead fishes was being conducted.

“While we are working to decipher and mitigate this strange incident, we appeal to locals in the affected communities and those who trade in aquatic animals to avoid consumption and sale of the dead fish, as such acts may carry criminal liabilities, especially with regard to deliberate sale of the dead fish to the public,” he said.

Whatever the outcome of the investigation, residents want an end of the sad event, a return to their lives and means of livelihood and assurance that a steps would be put in place to prevent a recurrence.