Unbelievable! Man Gets Run Over And Killed By Moving Plane After Going For Walk On Airport Runway


The plane's pilot saw the man before hitting him, and tried to maneuver the jet out of the way. 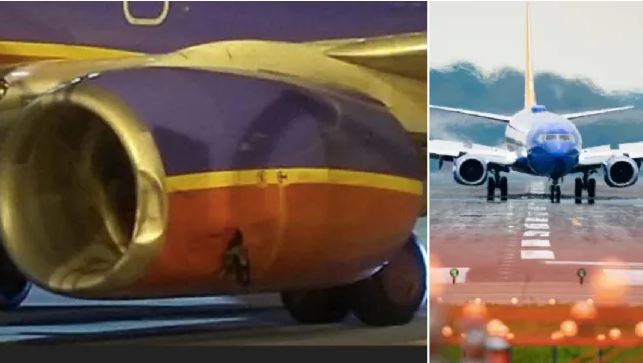 A Southwest Airlines Boeing 737’s engine damage is visible after it struck and killed a man walking on the runway of Austin-Bergstrom International Airport in Texas Thursday night (Pictures: CBS/EPA(file))

A man has been struck and killed by a Boeing 737 after he walked along an airport runway. The unidentified victim – believed to be a trespasser – died after being hit by the Southwest plane as it landed at Austin-Bergstrom International Airport in Texas on Thursday evening.

CBS News reported that the plane’s pilot saw the man before hitting him, and tried to maneuver the jet out of the way, but was unable to do so. An airport driver found the man’s remains on the runway shortly afterwards. Medical help was summoned, but he was pronounced dead at the scene.

A photo of the plane involved shows a huge dent on its cowling (engine housing) believed to have been caused by the moment of impact. The runway where the man was struck was closed for further investigation, with Austin-Bergstrom’s second runway remaining open. No-one on the affected plane, which had come from Dallas, was injured, with all on board disembarking shortly afterwards.

The man killed did not have any identification on him, and was not wearing an airport uniform. Police are continuing to investigate who he is, how he got onto the runway, and what he was doing there.

A Southwest spokesman told Fox7: ‘Southwest is fully cooperating with local law enforcement and FAA as those agencies investigate the event. We sincerely thank our Crew for their professionalism and swift response.’