Some Almajiris have been intercepted trying to enter Bayelsa state amid lockdown order. 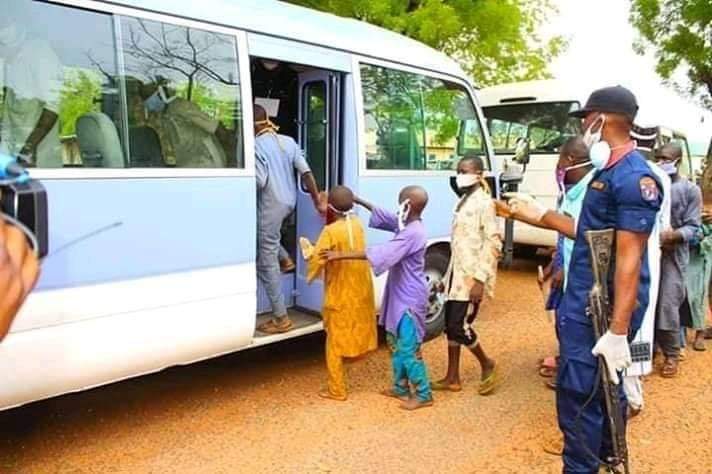 The Almajiris after they were intercepted in Bayelsa
The Bayelsa State government and security operatives have intercepted two buses carrying no fewer than 17 Quranic education pupils, more popularly known as “Almajiri” at the Glory Land entry point into Yenagoa, the state capital.
They were intercepted on Monday intercepted and sent back.
Freston Akpor, the Permanent Secretary of the Ministry of Information and Orientation and also a member of the state’s Covid-19 Taskforce, said that in quick response, the operatives stationed at the entry point ordered that the Almajiri children be taken back in the same buses conveying them.
According to Akpor, the buses were intercepted by a team of task force officials led by Akpoebi Agberebi with a team of security operatives on enforcing the “No Entry” directive of the government at the border.
According to the members of the State Task Force on Covid-19, the Almajirai were made up of young boys of various origins from the Northern states.
“While some of the Almajirai claimed they were on their way to the state on commercial fishing expedition, others claimed to be on the way to Port Harcourt, Rivers State.”
Akpor, however, confirmed that the 17 persons, including their drivers, were escorted to Patani, the border between Delta and Bayelsa states.
Top Stories