A Nigerian man has found himself in serious trouble after beating his wife and boasting about it on Facebook. 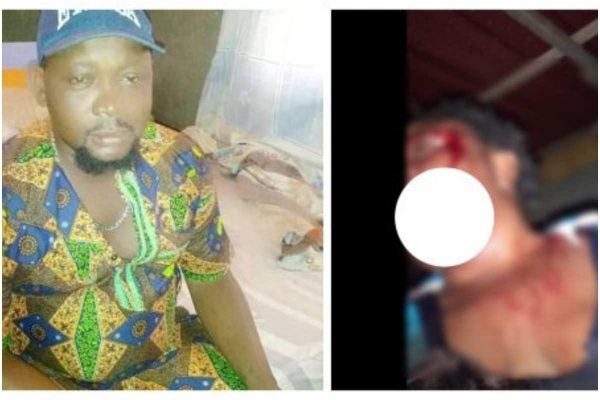 Afobaje Maiyegun, the Nigerian man who battered his wife and boasted about it on Facebook has now been arrested.

Recall that Afobaje Maiyegun took to social media yesterday to post the bloodied photos of his wife and boasted that he beat her up.
Sharing photos of his bleeding wife, he wrote:
“I beat my wife and am waiting for her police because I talk to a woman.”
According to a Twitter user Gawat Jibril, Afobaje has now been arrested and investigations revealed that this is not the first time he would be beating his wife.
Gawat Jibril wrote:
“One Mr “Afobaje Mayegun”, Man who beat up his wife mercilessly with injuries and dared the authorities to come and pick him. The @DSVRT swung into action and got him arrested at the Area J Division of the Lagos State Police Command
“Preliminary investigation conducted revealed that this is not the first time the said Mr Maiyegun would perpetrate such a dastardly act. A partner NGO, HerFessions Initiative was on ground to assist with the investigation.
“The case is set to be charged to court tomorrow, Friday 15th May 2020.
“This is to sound a clear warning that the Governor of Lagos State, Mr. @jidesanwoolu
has declared a zero-tolerance to Sexual and Gender-Based Violence in the State and as such perpetrators will face the full weight of the law”.
Top Stories