Some angry soldiers ambushed by Boko Haram terrorists in the far north have cried and cursed Nigeria's chief of army staff, Buratai. 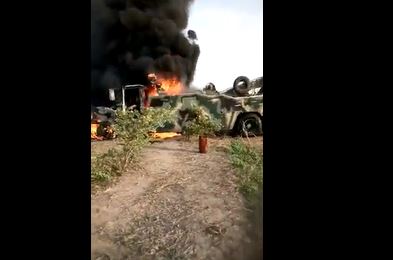 Boko Haram ambush soldiers in the northeast of Nigeria
A video has surfaced showing some angry Nigerian soldiers who are fighting Boko Haram terrorists in the northeast curse the Chief of Army Staff, Lt.-Gen. Tukur Buratai.
In the video shared by AutoJosh, the soldiers were lamenting after being ambushed by Boko Haram terrorists. Also, the Mine Resistant Ambush Protected vehicle could be seen in flames.
The soldier cursed Buratai, saying it will never be well with him.
Watch the video below:
Top Stories